2016 was an awful season both on and off the field. On the field Miami missed the postseason for the 13th straight season and off the field saw tragedy losing their ace Jose Fernandez in a horrible boating accident that claimed his young life. With heavy hearts the Marlins will flip the page to 2017 where they hope to make some noise in a fairly weak National League East. The first step to making noise will be to improve offensively. Miami finished 27th in the majors in runs scored and in order to win ball games the Marlins need to rank much higher than this The Marlins are projected to have the identical opening day lineup in 2017 as they did in 2016 but . last year Giancarlo Stanton missed time injured and Dee Gordon who was the National League batting champion in 2015 missed 80 games after a PED suspension. If Stanton is healthy for a full season and Gordon stays clean that already is a good start. Miami did see some positives a season ago. One being Marcell Ozuna who at a point in 2015 was so bad he was sent to the minors really improved in 2016. Ozuna batted .266 with 23 Home Runs. Catcher J.T. Realmuto also had a nice season batting .303 with 11 Home Runs and 48 RBI’s great numbers for a catcher. Lastly veteran Martin Prado earned a contract extension by hitting .305 with 75 RBIs at age 32. All in all the only way the Marlins offense success is if Giancarlo Stanton is healthy. They have the pieces to be a great lineup but in order to be great they need their star on the field. As for the starting pitching Miami obviously has a big hole to fill with Jose Fernandez no longer with us. The Marlins hope Wei Yin Chen and newly signed Edinson Volquez can lead the top of the rotation. Chen struggled in his first year in Miami a year ago pitching to a 4.96 ERA while Volquez struggled as well pitching to a 5.37 ERA. Both however have done some great things in their career and if they can re discover those great things will be exactly what the Marlins need. The rest of the rotation is filled with two up and down veterans Dan Straily and Jeff Locke who have been up and down in their careers and Tommy Koehler who has also been up and down. This rotation has a ton of question marks and has the potential to be either really good or really bad. As for the bullpen the Marlins have built a solid back end. A.J. Ramos made the National League all star team in 2016 with  2.81 ERA and 40 saves. They also brought in former Red Sox Brad Ziegler and Junichi Tazawa. Ziegler pitched to a 2.25 ERA in 2016 in a year where he split time between Arizona and Boston while Tazwa had 58 strikeouts in a mid to late inning role for Boston. This backend is solid from Miami and should succesful lock down games. All in all the Marlins are still a big starting pitcher away from succeeding. Unfortunately they did have that in Jose but rather than having him on the field they’ll have him in their hearts in 2017. 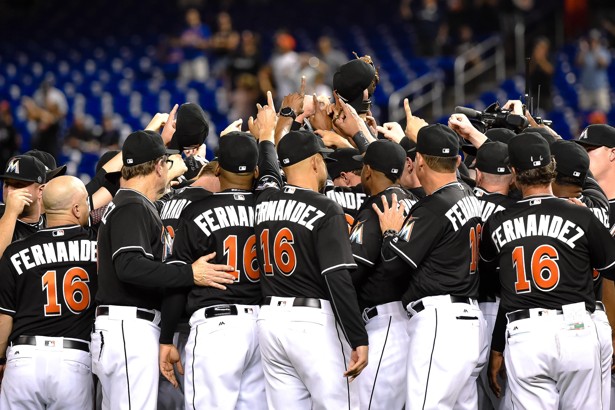 Jose Fernandez will in the Marlins hearts all season long. (Steve Mitchell / Reuters)