Out of respect and grief we paused the countdown to reflect on the passing’s of former Angels Infielder Andy Marte, and Royals ACE Yordano Ventura. The FR Sports teams send our respects to the families and organizations effected by these tragic deaths. We will roll on with the countdown today giving you number #25 and #24. Here’s number 25 the Milwaukee Brewers.

The Brewers are another one of those National League team in the rebuilding stage. Milwaukee hasn’t made the postseason since 2011 and will look to keep building toward the future in 2017. A year ago the Brewers offense finished 25th in runs scored. With Chris Carter gone and not much change there’s a chance that they can be finishing even lower in 2017. One of the major bright spots for the Brewers however was Infielder . Villar quietly had an outstanding year which should really have Brewers fans excited. He batted .285 with 19 Home Runs, and 63 RBI’s. He also led all of Baseball with an amazing 62 stolen bases. Villar seems to be the perfect leadoff hitter who can do a little bit of everything which is good news for the Brewers. Ryan Braun is also still playing at a high level. The six time all star batted .305 with 30 Home Runs and 91 RBI’s. Outside of Braun and VIllar however there isn’t much to write about. The Brewers did trade for former Red Sox Corner Infielder Travis Shaw who knocked in 76 RBIs a year ago. They also have some big name prospects ready to take center stage with Shortstop Orlando Arcia and Outfielder Domingo Santana set to start their first full major league seasons. With such a young lineup there will be some growing pains offensively for the Brewers in 2017. A for the starting pitching the Brewers staff finished 16th in ERA which is average. Looking ahead to 2017 there are a lot of familiar faces. Junior Guerra was a pleasant surprise for the Brewers. He pitched to a 2.81 ERA in 20 starts and could be even better with a full season in the rotation in 2017 Zach Davies had a 3.97 ERA and went 11-7 in 28 starts a pretty solid year for a 23 year old.  The rest of the rotation however really struggled. Chase Anderson and Matt Garza both had ERA’s over four. A key X factor for the Brewers rotation will be Wily Peralta. Peralta was a 2015 All Star but had an awful 2016. He had an ERA of 4.86 going 7-11. If Peralta can turn things around the Brewers rotation may be better than a year ago. If not the Brewers rotation will struggle again. The Brewers bullpen actually finished 11th in the majors in ERA last season but there are a lot of pieces gone. One of those being Tyler Thornburg who was traded to Boston. One guy still around is Carlos Torres. Torres was quietly great for the Brewers in 2016. He had an ERA  of 2.73 and struck out 78 batters. The Brewers also have a new closer. Neftali Feliz  who was once the AL Rookie Of The Year and a key part of a Texas Rangers team that made it to two straight World Series pitched to an ERA of 3.62 and will get a chance to close for the Brewers in 2017. He has a lot of upside and can be very good if on his game. All in all the Brewers rebuild is still coming along thus they won’t compete much in 2017. They do have some nice young players that will make trips to Miller Park fun trips.  Jonathan Villar emerged as a star for the Brewers in 2016 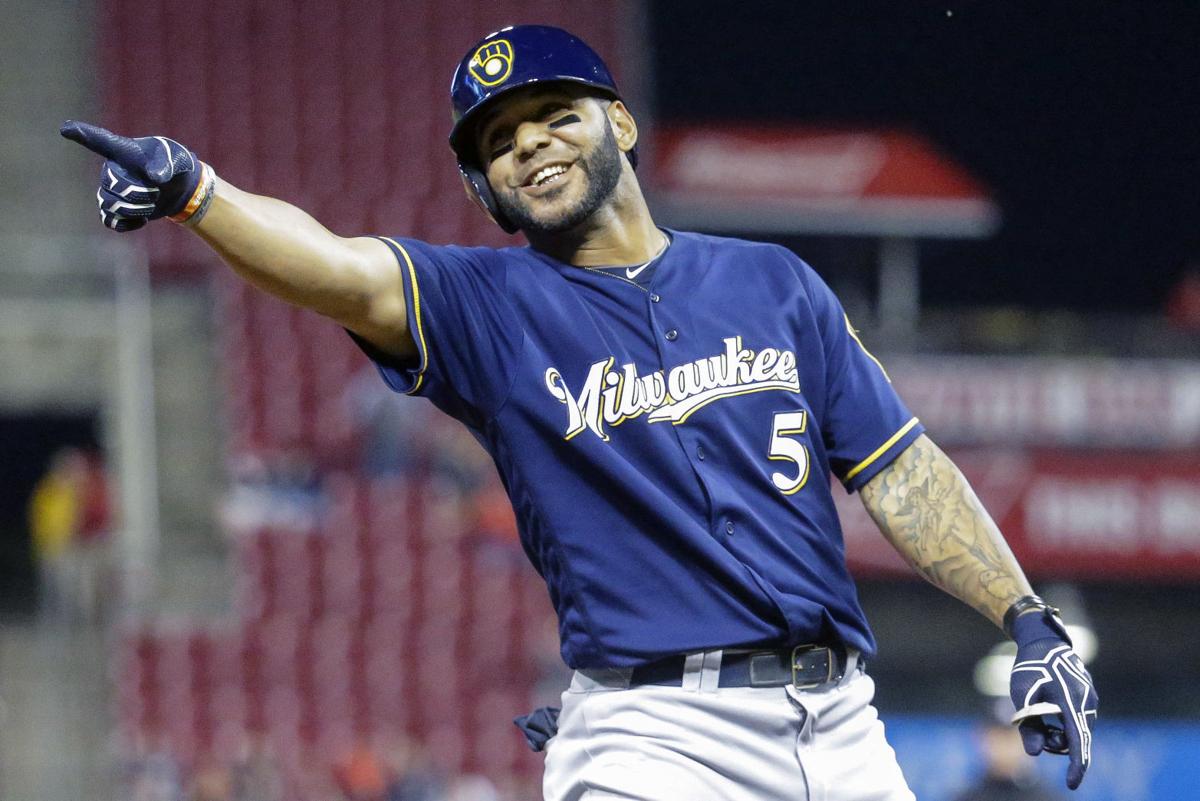 Jonathan Villar emerged as a star for the Brewers in 2016. (AP John Michillo)