We move on with our Studs and Duds in the NL Central.

Anthony Rizzo is one of the best players in the sport, so it’s no surprise he’s tearing it up this spring. Batting .333, with two long balls, and 11 runs batted in Rizzo is ready to lead the Cubs to what they hope will be the year they break the curse. As for infielder Munenori Kawasaki who sports one of the best personalities in the sport he has put together a very nice spring for the Cubs. He has batted .395, with 15 RBI’s this spring which could land him a spot on the opening day roster or get him up to the North Side Of Chicago quickly if some of the Cubs young infielders struggle. Reliever Spencer Patton is among those competing for one of the final bullpen spots for the Cubs. Patton in 7.1 innings of work has yet to allow a run while striking out 12 which gives him a solid case as to why he should make the team The Cubs have already informed veteran outfielder Shane Victorino he will not be in Chicago for opening day as the veteran has struggled this spring with just two hits, with no RBI’s or home runs. Former Giant and postseason hero Juan Perez will be minors bound as well as he has had a very disappointing spring. Perez has batted .129 with just four hits in 31 trips to the plate. Closer Hector Rondon has had an ugly spring and the Cubs better hope he can figure things out as the bullpen is probably the weakest link to this very strong ball club. In seven appearances Rondon has an ERA of 12.15 which is reason for concern for Cubs fans. 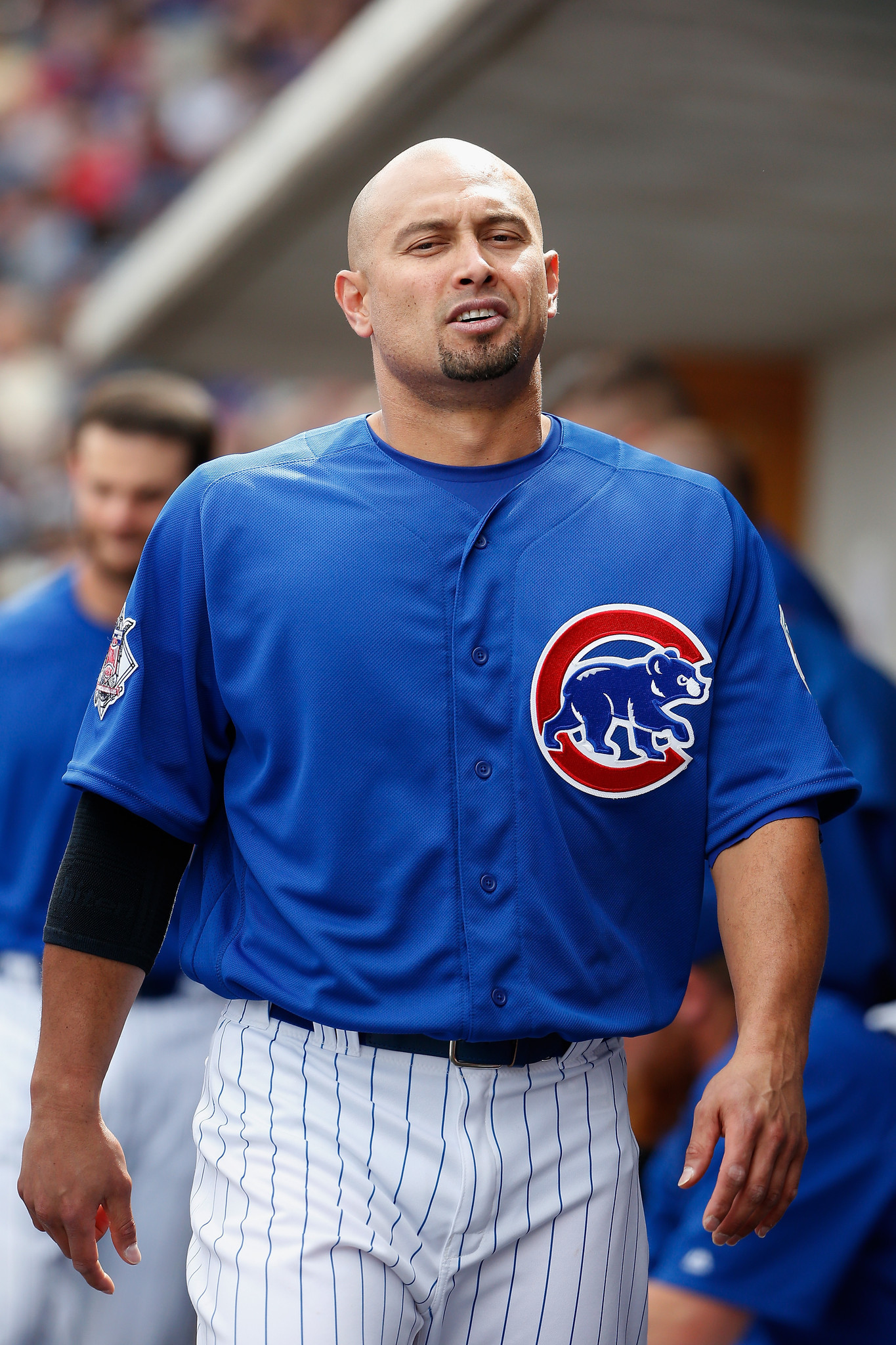 Juan Gonzalez battling for a spot in the Redbirds bullpen has certainly done a pretty solid job in trying to grab one of those roster spots. In six innings of works Gonzalez has pitched to a 1.50 ERA. The Cardinals brought in Seung Hwan Oh known as “the final boss” from Korea and he has showed why he has earned that nickname this spring. Oh has pitched to a 2.35 ERA in 7.2 very solid innings as he looks to have success in his first major league season. The Cardinals have some amazing outfield prospects that have come out of nowhere to be big factors on the big league roster Randal Grichuk, Tommy Pham, and Stephen Piscotty just to name a few. Jeremy Hazelbaker looks to be that next one. Batting near .300 this spring with 11 hits. “The Final Boss” is ready for the STL (AP)

Coming off a sub par 2015 Seth Maness has struggled in the spring of 2016. With an ERA of 9.45 In 6.2 relief innings Maness may be in risk of heading to the minors if he can’t get his stuff together during the final week of spring training. The Cardinals traded for ex Padre Jedd Gyorko in hope of getting a power hitting bench infield bat. This spring he hasn’t been what the Redbirds were looking for. Batting just .200 in 45 at bats, and homerless. MLB roster hopeful Jacob Wilson is another infielder who has struggled this spring at Cardinal camp. With just six hits in 29 trips to the plate it doesn’t look like Wilson will be major league bound come opening day.

It seems the Buccos have found lighting in a bottle with two relievers who have had there high ups and very low downs in there careers this spring. Starting off with Juan Nicasio the ex Rockie and Dodger he has pitched 15 innings of shut out baseball this spring with 24 strikeouts five games including four starts. It seems that Nicasico’s hot spring won’t just earn him a spot in the bullpen but the starting rotation. Netalfi Feliz was once a rookie of the year during his time as the closer for the Texas Rangers until injuries started plaguing his career. This spring however he looks dominate. In seven innings of work he has pitched to a 1.29 ERA. If Feliz continues to find his old self the Pirates bullpen that was the best in the National League a year ago has potential to be even stronger. Michael Morse 2014 playoff hero for the the San Francisco Giants has had a great spring for the Pirates. Batting .345 with 10 hits in 29 trips to the plate. This hot spring should get Morse plenty of playing time come opening day.

It’s been quite the spring for Juan Niasco (Getty Images)

It has not been too hot of a spring for Pirates starting Right Fielder Gregory Polanco. In 42 at bats he’s batting just .214 with only nine hits. The Buccos hope that by opening day Polanco his his normal self. When he is on he’s a very elite outfielder. Jake Goebbert is among the utility men trying to grab a spot on the Pirates opening day lineup. However due to his rough spring it’s going to be hard to earn a spot. In 30 at bats Goebbert is batting just .167 with five hits. Jeff Locke a Pirate starter the past few years may need to prepare to be a reliever due to his dreadful spring. Locke has an ERA of 6.63 over 19 innings of work and five starts.

With the Brewers roster wide open some bats have made some great impressions to make the roster. Including Infielder Hernan Perez. The 25 year old is batting .324 with 11 hits, in 34 at bats this spring making his case to earn an opening day roster spot. Martin Maldonado is the Brewers backup catcher but soon may end up as the starter as Jonathan Lucroy always seems to be in the middle of trade rumors. If Lucory does get shipped off elsewhere the Brewers will still have themselves a pretty good catcher. This spring Maldonado is batting .351 and is known for having a cannon behind the plate. Veteran pitcher Chris Capuano had a 2015 to forget as he seemed to be designated for assignment by the Yankees every week. This spring however has been a spring to remember. In seven outings he has pitched to a 1.69 ERA and should be a member of the Brew Crew bullpen come opening day.

The Brewers traded for Chase Anderson to help add to their weak rotation this spring however this trade seems to have been a mistake at least based on spring results. Anderson in four starts has an ERA of 10.13 and has just four strikeouts in 10.2 innings of work not pretty. Tyler Thornburg Brewers reliever has also had a rough spring. In seven innings he has pitched to a high ERA of 10.29 which is reason for concern for Brewer fans. Aaron Hill was apart of that Chase Anderson trade and is lined up to be the Brewers opening day third basemen. The veteran however has struggled big time this spring. He is batting just .140 in 43 spring at bats.

Reds third basemen Eugenio Suarez has had an impressive spring. He is batting .348 with 10 RBI’s with 16 hits in 46 spring at bats. Utility man Adam Duvall has also had an impressive spring He has knocked out three long balls in 56 at bats with 13 RBI’s and a .321 average. Tony Cingrani Reds set-up man has proved he can be a solid reliever this spring in eight games he has ERA under one at 0.87 in 10.1 innings of work. 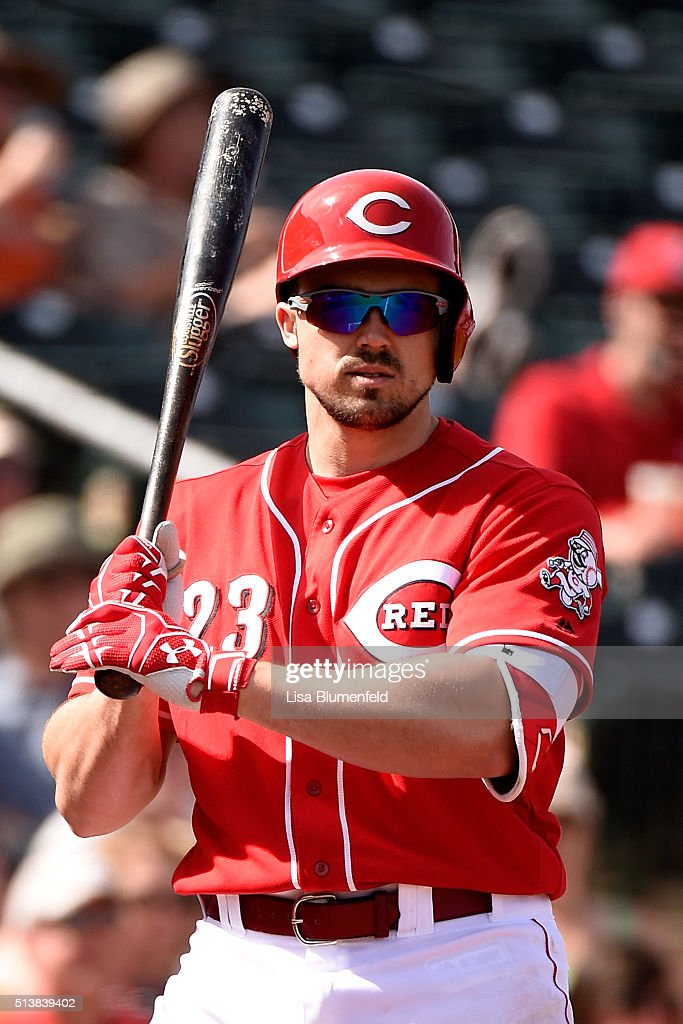 It’s been a big spring for Adam Duvall (Getty Images)

Everyone knows Billy Hamilton can run and field. However the question is can he hit. The answer according to his spring is no. He is batting just .161 in 31 at bats. In order to steal bases he needs to get on base and with that average he won’t be getting on base much.  Andrew DeSclafani is supposed to be the Reds ace. This spring however he looks like the opposite of an ace. In 19.1 innings of work he has pitched to an ERA of 8.38. Jumbo Diaz the Reds closer has also had an awful spring. Pitching to a 7.88 ERA in eight innings of work this spring.