Bronx NY- The New York Yankees missed out on the playoffs for the third time in four years in 2016 finishing at 84-78. Despite missing out on October Baseball the Yankees clinched their 24th straight winning season an amazing feat. The Yankees said goodbye to the old and hello to the new in 2016. With block bluster trades that turned the Yankees farm system into one of the best in the game, retirements of veterans Alex Rodriguez (Mid Season), and Mark Teixeira (At Seasons End). Many home grown Yankee prospects also came up and showed Yankees fans the future is bright and despite missing out on October that the Yankees will be back to being an elite team very very soon. To look back at the season will go month by month to relive the season it was.

April: After a strong series at home to open up the season taking two out of three games from the Houston Astros the team that knocked the Yankees out of the 2015 postseason the team began to struggle. They lost three straight series including being swept at home by the Oakland A’s. Finishing the month with a poor 8-14 record. The best moment of the month for the Yankees came on April 23rd when Brett Gardner lifted the Yankees over the Tampa Bay Rays with a walk off Solo Home Run.

It was a dark April for A-Rod and the Yankees. 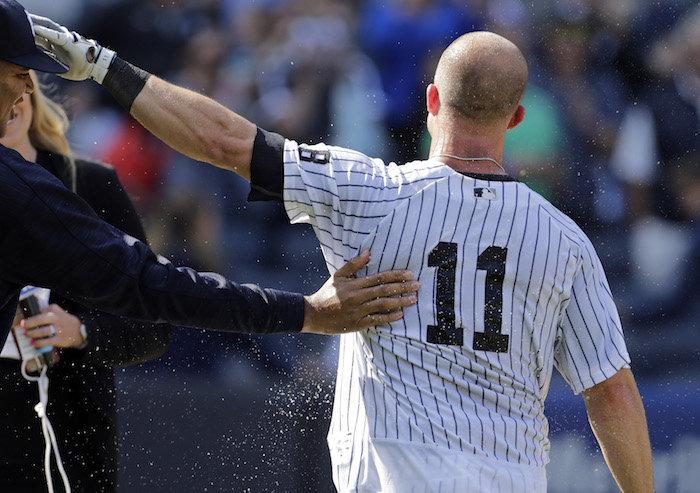 May: As the calendar flipped to May the Yankees struggles continued. The Yankees started off May by being swept aside by the Boston Red Sox, and then losing two out of three in Baltimore. Then the tide began to shift. The Yankees bullpen got Aroldis Chapman back from a 30 game ban which created a three headed monster in the back of the bullpen with Dellin Betances, Andrew Miller, and Chapman. The team began to win series and finished the month 16-13 bringing the clubs overall record to 24-27 entering June. The moment of the month came on the night of May 6th when closer Andrew Miller got out of a bases loaded one out jam to secure a 3-2 win over the Boston Red Sox helping the Yankees crawl out of a whole that put them eight games under the .500 mark. 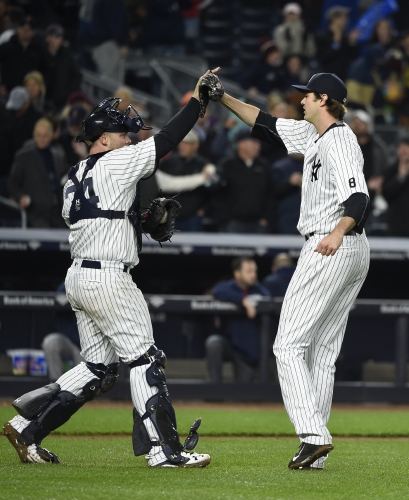 Andrew Miller closes out the Red Sox on May 6th after getting out of a major jam. The Yankees earned their first sweep of 2016 when they swept a four game series in Oakland vs the A’s.

June: After rebounding in May the Yankees went 15-12 in June keeping up with their May pace. The bullpen, Carlos Beltran, Gregorius, and Starlin Castro kept on carrying the club as Chase Headley, Alex Rodriguez, and Mark Teixeira struggled. The Yankees earned their second sweep of the season when they swept the Angels out of town in a four game series that was very one handed. The moment of the month came at the end of June. The Texas Rangers lead the Yankees by four going into the bottom of the 9th that’s when the Yankees stormed back. A three run game tying home run by Brian McCann set the stage for Didi with a runner on first. Gregorius hit a line drive that got over the short porch in right to win the ball game 9-7 an amazing comeback that put the Yankees within a game of .500. Didi Gregorius capped off one of the best moments of the Yankees season with a walk off home run to complete a four fun ninth inning come back.

Carlos Beltran was a big part of the Yankees success in the month of June.

July: July of 2016 was intriguing to say the least for the Yankees and their fans. The team sent three players to San Diego for the 2016 All Star Game: Andrew Miller, Delin Betances, and Carlos Beltran. For the first time in 29 years the Yankees became trade deadline sellers as the team went into the All Star break at an even .500 mark and struggled to stay over .500. With the Yankees just 49-48 on July 23rd Brian Cashman made his first move. He traded closer Aroldis Chapman to the Cubs for reliever Adam Warren, and a package of prospects that included the Cubs top prospect Short Stop Gleyber Torres. After the Yankees were swept aside by the last place Tampa Bay Rays Brian Cashman finished the fire sale trading setup man/closer Andrew Miller to the Indians for a package of prospect that included 2013 first round pick Clint Fraizer. The team also traded Carlos Beltran who hit 22 home runs for the Yankees to the Texas Rangers for a prospect package that included top pitching prospect Dillon Tate. Ivan Nova was also traded away by Cashman. Nova was sent to the Pirates for two players to be named later. The Yankees did trade for Tyler Clippard once a standout closer Tyler Clippard who would serve as a setup man and closer for the Yankees through August and September. The on the field moment of the month for the Bombers came before the fire sale on July 9th when the Yankees took down the first place Indians in an exciting 11 inning game. Brian McCann hit a game winning double VS the Tribe on July 7th.

The Yankees dealt Aroldis Chapman to the Cubs about a week prior to the August 1st trade deadline.

August: The Yankees began a youth movement in August that would propel the Yankees into a playoff race despite trading away two all stars, and a total of three star players. The youth movement included the call-ups of catcher Garry Sanchez, and later Right Fielder Aaron Judge, and First Basemen/Outfielder Tyler Austin. Before the youth movement it was out with the old. Mark Teixeira made the announcement that he would be retiring after the season citing injuries as his reason. Just two days later Alex Rodriguez and the Yankees agreed to plan that would be the end of A-Rod’s carer. He announced on August 7th that he would be leaving the team on the field to join the front office he was let go by the Yankees after his final game which came on Friday August 12th The moments of the month came on back to back days August 12th, and 13th. A-Rod hit an RBI Double going 1-4 in the ball game finishing 2016 with nine homers, 31 RBIS, and a batting average of just .200. The day after A Rod said his farewells. Aaron Judge, and Tyler Austin made their MLB Debuts in with the new… The pair hit back to back solo home runs in their first big league at bats the first duo ever to do so in an 8-4 win over the Tampa Bay Rays. Gary Sanchez joined the Yankees youth party in a big way he hit an amazing 11 home runs in 23 games winning AL Rookie, and Player Of The Month Honors. The Team went 17-10 in August and sat in striking distance of a playoff spot entering the months final season 68-63.

A-Rod said goodbye to his Yankee playing days after a 6-3 win VS Tampa Bay on August 12th.

Gary Sanchez had an historic run for the Yankees in August which helped the team back into the Postseason chase.

September/October: The Yankees started off September on fire after dropping two in a row to the Orioles the Yankees soared to a seven game win streak. This win streak put the Yanks 12 games over .500 and just one game back of a wild card spot. Then the magic faded. Despite nine more Gary Sanchez long balls, the Yankees couldn’t finish the season off strong. The team was swept in a four game set by the AL East Champion Red Sox at Fenway Park that really ended the Yanks playoff hopes. The Yankees did get some revenge as the team swept the Red Sox back the following week. The moment of the month game in the middle game of that Boston series as Mark Teixeira hit a walk off Grand Slam Home Run his final home run of his carer, and first regular season walk off home run of his carer, in his final week in the pros. The Yankees bided Teixeira farwell before the team’s final game on October 2nd. The team finished the season 84-78 4th in the AL East.