Just a couple decades ago, players at the power forward position only had a few responsibilities– playing defense, grabbing rebounds, and working on the block on offense. Players such as Kevin McHale, Karl Malone, and Charles Barkley excelled at doing just this, and are now in the Hall of Fame.  Things have changed though, as the league is putting more and more emphasis on the 3-point shot.  A perimeter-oriented stretch 4 was once a specialist in the NBA, but is increasingly becoming the norm.  Still, the need for a power forward who can grab rebounds and score in the post hasn’t changed too much, and the advent of the 3-pointer is still a luxury among big men.  Of course, these are just a few of the factors that go into measuring the best power forwards in today’s league, and go into determining the top 5 power forwards in the NBA: It was expected around the league that fans in Portland would claim that perhaps Aldridge was not that good after all, that he wasn’t the best teammate, or he wouldn’t fit with the Spurs.  As soon as the season started, the rumors intensified a bit with Aldridge’s significant decrease in minutes from last year, (29.4 from 35.4) and point per game (15.6 from 23.4).  But, as the season wore on, fans really got to see the value that he presented to the San Antonio Spurs, providing a much needed athletic, defensive force alongside the aging Tim Duncan.  An interesting factor to take note of is how Aldridge has completely taken the three point shot out of his game this year, which is most likely due to Gregg Popovich’s game plan.  He shot at a league average 35% from behind the arc last year in Portland, but has taken only 10 threes this year, making none of them.  In a way, this shows the interior presence Aldridge has on offense– he is so good in the post that Popovich does not need or want him to shoot outside the three point line.

Chris Bosh is now fully revamped from the post-LeBron rejuvenation that occurred last season, when he suffered a blood clot in his lung and had to end his season after 44 games.  At age 31, Bosh is still expanding his game, and, opposite to Aldridge, is shooting the best percentage of three pointers in his career. (37.6%)  With the emergence of Hassan Whiteside last year, Bosh was able to return to his true position of power forward, where he plays his best basketball.  This has freed up more space for the Miami offense, which now has a multitude of options (most of them involving Bosh doing the scoring) when in the half-court set.  Even though Dwyane Wade is slowing down, the Heat have a very strong defensive team, which should make them a hard team to beat during the Eastern Conference Playoffs. 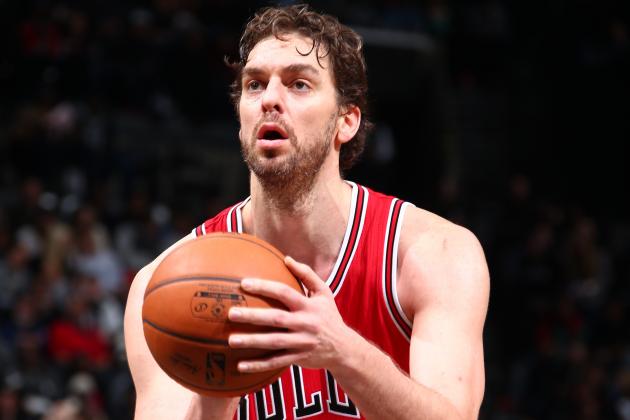 After two non-productive seasons with the Lakers, filled with injuries and disappointments, it appeared as though Gasol was ready to wind down his career by requiring a move to the center position, and a reduction in playing time.  After being benched by Lakers coach Mike D’Antoni, Gasol knew he needed a change of scenery.  In the summer of 2014, he joined the Chicago Bulls, and has magically transformed back to his peak form that he played with a decade ago, at age 35.  This year, Gasol’s stats mirror or are better than the ones he was putting up 10 years ago in Memphis, which has surprised almost everyone in the NBA.  He is averaging more blocks, rebounds, and assists than his 06-07 campaign in Memphis, and has developed a strong post presence on defense.  Gasol’s amazing production for his age has helped the Bulls to third place in the Eastern Conference leading up to the All-Star Break.

This year, Draymond Green has developed to be the best in the league at triple-doubles, trash talking, and the increased quality in Steph Curry’s play.  Warriors coach Steve Kerr directly referenced Green when talking about how dominant they have been this season, and alludes to the value he brings to the team that extends beyond scoring.  In a recent post game interview following the Warriors 120-90 rout of the San Antonio Spurs, Kerr states that “Draymond is such a lethal playmaker, and when the ball moves and you got playmakers like Draymond, then you can really cut, move, and the ball can start flying around, and as long as you make good decisions it’s tough to guard all that.”  Along with the 8 triple doubles that Green has this season, his versatility on the defensive end has earned him a good deal of respect, which has also played a role in helping the Warriors to a 41-4 record approaching the halfway point of the season. Anthony Davis stands out as the best in his position more than any other player in the league.  He is only 22 years old, and has only gotten to the threshold of his maxed-out talent.  While Steph Curry and Lebron James continue their back-and-forth in the league’s top-player discussion, an argument could be made that they both already have been passed by Davis. Playing on a dreadful Pelicans team which provides almost no help on offense, he is still putting up great stats, proven by the double-double he averages in points and rebounds per game.  Davis also has impeccable instincts, impressive athleticism, and a high basketball I.Q., which makes him a great shot blocker and defender around the paint.  Davis’s ability to beat you off the dribble, and in the post makes him almost unguardable, and he is only going to get better.