Where do LeBron and Durant rank on the top 5 small forwards? (Photo by Bill Baptist/NBAE via Getty Images)

Through the years, small forwards have often been the most versatile athletes on the court. Similar to a middle linebacker in football, players at this position have to be good at everything, such as dribbling to the basket, having an outside shot, and finishing fast breaks with spectacular dunks.  There’s no shortage of standouts in today’s NBA at the small forward spot, proven by the fact that in the past 10 seasons, the MVP award has been given to a player at this position 5 times (LeBron James has won the award in 4 out of these 5 seasons, with the other belonging to Kevin Durant).  With so much talent at this position this year, who made the cut for the top 5 small forwards in the league?

Even though Anthony is having a down year in terms of numbers (his 21.7 points per game average is the lowest of his career since his second season in the NBA), he is still one of the league’s most dynamic scorers.  Anthony has a unique ability to terrorize a defense with a soft touch on his jump shot combined with an immense amount of strength when penetrating to the hoop or posting up.  Now on the wrong side of 30, Anthony has found other ways he can help his team out besides scoring; he has vastly improved in other areas that critics used to criticize him when deeming Anthony as “not a complete player.”  His 7.6 rebounds per game is a career high, which goes along nicely with his 3.7 assists per game (his highest since the 2006-07 season).

After coming off a compound fracture in his leg just two summers ago, most people thought that Paul George would become the next Brandon Roy– a promising young player who’s career was derailed by injuries.  In fact, there were questions on whether George would ever play basketball again, let alone at the MVP-candidate form he was at prior to the injury.  All of these questions were answered swiftly and convincingly once this season kicked off.  Not only was George able to strongly comeback from his injury, he is also playing the best basketball of his life with career-highs in points, rebounds, and assists.  George has tallied 11 games this year with 30 or more points, and his name has often been mentioned in MVP conversations.  The only facet of George’s game that is holding him back right now is his defense, along with his ability to get his teammates involved (other than C.J. Miles).  Considering George’s superb play, it is a bit surprising that the Pacers are only 19-15, sitting at sixth place in a revamped Eastern Conference, which, in my point of view, gives the third place player on my list an edge over George. 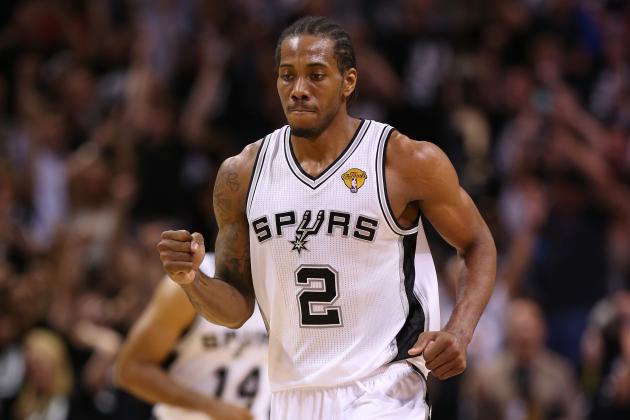 Leonard has cemented his spot among the top players at his position, and has a strong argument for being one of the best players in the league overall.  Even though Leonard hasn’t produced the insane stats that players such as Steph Curry have done this year, he is a versatile offensive player, who has had a career-high in points this year, and excels in the San Antonio system.  However, Leonard’s defense is mainly what got him the third spot on my list.  He won the Defensive Player of the Year last year, and I wouldn’t be surprised if he does so again in 2016.  It is common to hear that he is the greatest defender in the NBA, which his 2.03 steals per game certainly back up.  As expected, the Spurs are the second best team in the league with a 30-6 record, and look destined for a matchup against the Golden State Warriors in the Western Conference Finals. Kevin Durant is one of the best physical specimens the NBA have ever seen.  His 7’4” wingspan makes him pretty much impossible to guard, but when combined with ability to make shots from anywhere on the floor, you create one of the greatest scoring machines in NBA history.  Durant uses his elite shooting to break down defenders when driving to the hoop, using his jump shot as bait to blow past a defender for an easy dunk.  After appearing in only 27 games last season, Durant is making up for his missed time this year with spectacular play on both sides of the ball.  The Thunder’s success rides on the shoulders of Durant and Russell Westbrook, who have to stay healthy in order to make a serious playoff run this year. LeBron James has fighting off relentless detractors for the past 12 NBA seasons, which most likely will not change right through his first ballot selection to the NBA Hall of Fame.  We don’t have to trout over basic stats or advanced metrics to make the case for the four-time MVP as best at his position.  It has become routine for James to post the types of numbers that he is doing this season, which has propelled the Cavaliers atop the Eastern Conference with a 24-9 record.  With the return of Kyrie Irving, the Cavs are one of the favorites to win it all this year, which can be credited to the stellar play of Lebron James.