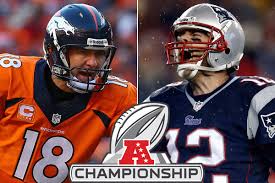 It’s happening again. For the 17th time in NFL history, Peyton Manning and Tom Brady will face off. The Patriots are favored to win what could possibly be Manning and Brady’s last face off by 3 points and this game will definitely be different than the last matchup which ended in a Bronco’s victory in overtime.  When the Broncos won last time the Patriots were missing Julian Edelman, Rob Gronkowski, Danny Amendola, Jamie Collins, and Dont’a Hightower who are 5 of the best players on the Patriots. As for the Bronco’s, they will be playing with Peyton Manning rather than Osweiler which honestly could be a bad thing. When the Broncos and Patriots last played, Osweiler was able to lead the team and make some key plays that allowed them to win. Peyton on the other hand has not had a very good season. Even last week, Peyton wasn’t able to throw any touchdowns. In fact, the Bronco’s kicked 5 field goals. The game might have seemed close, but it could have just as easily been a field day for the Broncos if they could have been able to trade those field goals for touchdowns. This game won’t be completely one sided towards the Patriots however. The Broncos still have the top ranked defense so if any defense can stop Brady, its the Bronco’s. The difference between this week and week 11 however is that the Broncos will just be playing against a much better offense so they will need to adjust. In addition to their great defense, the Broncos once again have homefield advantage which is an especially impactful edge since the game will be played in Denver. Last week I guessed that the Steelers would get tired out in the second half while the Broncos would remain strong since they were used to the higher altitude and in the second half, the Broncos managed to pull off a comeback scoring 14 points while the Steelers only scored 6. This even happened between the Patriots and Broncos in week 11 when the Broncos managed to score 23 points in the second half while the Patriots only scored 10. While this is true, I’m not going to underestimate the Patriots once again. I thought the Patriots were falling apart after their 2-4 record to end the season, however they managed to prove that they were a great team when they defeated the red hot Chiefs last week. Since the Patriots have a lot of their players back, I think they will be able to walk out of Denver with a victory.