The Bucs are coming off back to back wins. ( Marcio Jose Sanchez AP Photo)

Tampa Bay FL-  Well it is safe to say the NFC South is the weakest division in the NFC. The Falcons (4-3) have a 0.5 game lead over the second place Bucs (3-3), a two game lead over the 2-4 Saints, and a three game lead on last years NFC Champions the Carolina Panthers who are off to a dreadful 1-5 start. The Falcons slim lead may not stick for long and the team who could really take advantage and run away with the South is the Tampa Bay Buccaneers.

Tampa Bay’s offense has been pretty solid thus far even with a plethora of injuries. Starting running back Doug Martin has been out since Week 3, and third down back, and second running back Charles Sims lost his season to a knee injury. However the Bucs rushing attack has still been productive. Despite ranking 19th in the NFL in rushing yards. In the Bucs first two games without both Charles Sims, and Doug Martin Jacquizz Rodgers has done an amazing job. He ran for 101 yards in the win over Carolina two weeks ago, and hauled in five receptions for 28 yards. In the Bucs win over the 49ers a week ago he ran for 154 yards. He hasn’t been the only Tampa Bay running back helping ease the losses of Martin and Sims. Peyton Barber is coming off a game where he ran for 84 yards and a score VS the 49ers. With Sims’s season over and Martin unlikely to play this weekend look for Rodgers, and Barber to play big roles VS a Raiders team that is fifth worst in the NFL at stopping the run this weekend.

Jacquizz Rodgers has been a godsent for the Bucs who are without Doug Martin, and Charles Sims. ( Ben Margot AP Photo)

As for the passing attack Jameis Winston only has one game without throwing an interception this season which was two weeks ago in the win over Carolina. The rest of the numbers on Winston however are pretty solid. He’s thrown for 12 touchdowns, 1,596 yards, and has a completion percentage of 59.9%. The Bucs rank 23rd in the NFL in passing offense, but if Winston can improve his turnover ratio, and keep on throwing Touchdowns the Bucs offense can really take off due to the Receiving core Winston has to work with. Mike Evans one of the best Wide Outs in the NFL has the 10th most Receiving yards in the NFL at 545, and is tied for the NFL lead in Touchdown catches with six. With Vincent Jackson out for the season Winston needed guys to step up and so far they have. Russell Shepard broke out a week ago in Santa Clara VS the 49ers with five catches for 77 yards, including a Touchdown, Adam Humphries is just three weeks removed from an 100 yard game, and Tight End Cameron Brate has caught two touchdowns, and has proved to be a reliable target for Winston replacing the recently cut Austin Seferian- Jenkins.

The Bucs offense has saw improved play from their offense line has helped the Bucs win games. In the four games of the year Jameis Winston was sacked nine times including five times in the Bucs loss to Denver. Winston also threw eight picks in those games due to the lack of time he had in the pocket. The Bucs went 1-3 in those games. In the last two games Winston has been sacked four times two in each of the last two weeks which isn’t a great stat, but he’s only thrown one interception. The O Line also created a lot of holes the last few weeks for the running game. The Bucs ran for 249 yards on the 49ers. If the O Line can keep on creating holes for the running game, and protect Winston a little better expect the Tampa Bay offense to be a pretty complete one.

As for the defense the Bucs have looked much improved the last few weeks. The team held the 49ers, and Panthers to a combined 31 points over the last two weeks in winning efforts. Since week’s two and three where the Bucs gave up 40 points to Arizona, and 37 to LA the defense has done a great job. Led by linebackers Kwon Alexander, and Lavonte David the Bucs run defense ranks 16th in the NFL. The passing defense ranks number eight in the NFL and is by far the best in the NFC South as the next best pass defense in the south belongs to Carolina ranked 18th. Cornerback Brent Grimes has been a great pickup for Tampa Bay he trails only the Raiders David Amerson, Patriots Malcom Butler, and Giants Jenoris Jenkins in passes defended. Free Safety Chirs Conte is second on the team in tackles with 36 proving to be a force for the Bucs defense. The team will look to get some more turnovers however as they only have nine take ways Tampa Bay probably has the best defense in the NFC South. In a division with a lot of high power offenses it will be key for Tampa to stay stingy on defense to win the NFC South race. 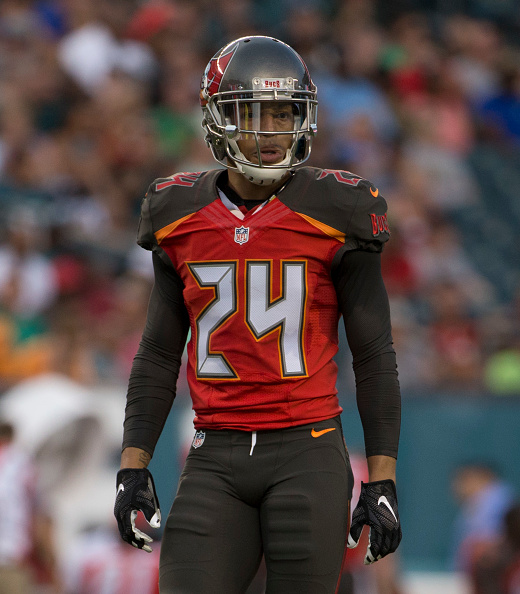 Brent Grimes has been a great pick up for the Bucs. (Getty Images)

Who Will Win The NFC South? It’s a crap shoot. Their is no great football team to see, but it will make for an interesting playoff race as even the 1-5 Panthers are still alive. However with a top 10 defense, and an offense really clicking on cylinders, and a perfect divisional record the Tampa Buccaneers should be considered the team to beat.