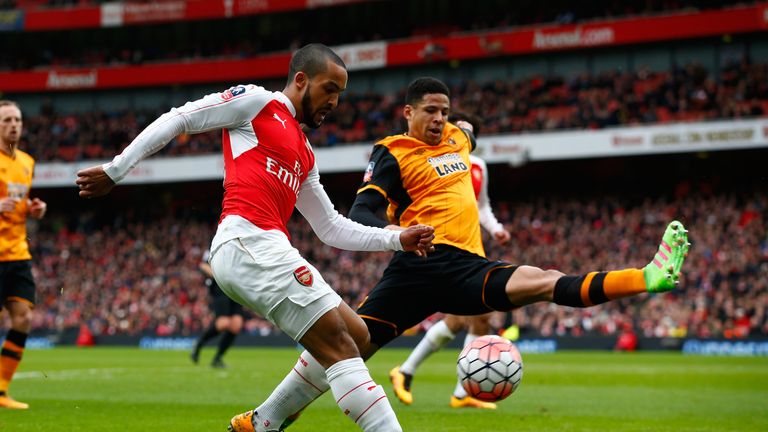 Walcott has a shot, but the resilient Hull defense refuses anything to go in.

Result forces replay of this fixture

Arsenal dominated Hull City, but failed to find the back of the net against a resilient Tiger’s defense. The Gunners hit the target 11 times out of a whopping 26 shots, but Hull second choice keeper Jakupovic saved all 11. Arsenal maintained 68 percent of possession and were constantly looking for a way to break down oppostion’s defense. With Arsene Wenger having rested his stars, we learned that Arsenal truly lack the ability to score without some of their key players on the pitch. One could only imagine the difference in the result had Ozil, Giroud, Sanchez, Ramsey etc. started for the Gunners. An overall disappointing performance by Arsenal, having to now play this fixture again, adding another match to their already grueling schedule.

Ospina: 6- had almost nothing to do

Chambers: 7- kept things calm at the back, saw a good amount of the ball going down the right hand side

Mertesacker: 6- didn’t do anything wrong, but looked sluggish as always

Koscielny: 5- in such a boring and easy fixture, to think he should have been sent off comments on his brainless afternoon

Gibbs: 7- great runs down the left, provided the ball in to Walcott for on of the best chances of the game

Elneny: 7- looked lively in midfield, his shot should have drawn a penalty

ni: 6- completed 95% of his passes, but none of them counted, rarely sparked an attack

Campbell: 6- great free kick denied by the Hull keeper, otherwise he was well shut out

Iwobi: 6- showed flashes of talent, but seen as weak a bit too often against a resilient Hull defense

Welbeck: 7- best attacking hope in the game, showed some greats shots, unlucky to not see the ball hit the back of the net