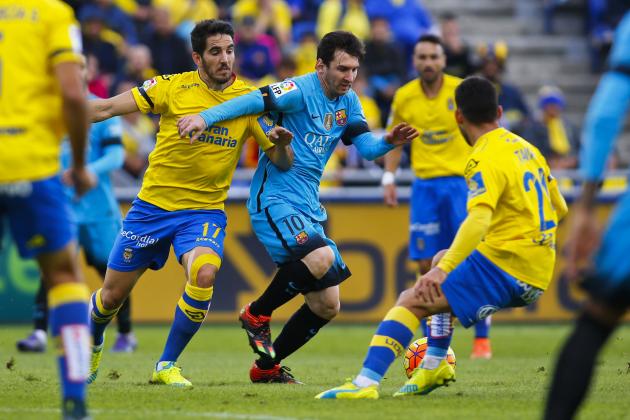 Messi given a hard time by Las Palmas [Bleacher Report]

Barcelona didn’t look like it’s usually self after what could be called a fortunate win at Las Palmas. Deprived of Pique at back and having the pairing Mascherano and Mathieu at back, who hasn’t played too well or often with each other, has seen many cracks in the defense during the game. Las Palmas had as many chances and could’ve tied the game a few times if they hadn’t missed. Passes kept getting strung through the poor Barcelona defense and it could be seen at times that the players weren’t on the same wavelength. However, Las Palmas goalkeeper Varas came up big a few times as the trio MSN (Messi, Neymar, Suarez) shredded the defense during counter attacks and even set pieces. A save from point blank range from Suarez was the highlight of Varas’s night and would surely have been the hero if Las Palmas had scored more. Still, Las Palmas had very good chemistry and played with no fear despite being in the relegation zone and being promoted only this season from the 2nd division (Liga Adelante). Barcelona does have the excuse of having to look forward to their crucial Champions League first leg match against Premier League outfit Arsenal. Having left out Rakitic and Pique, crucial pieces in the Barcelona midfield and defense respectively, fans can only hope that the players will find their chemistry and go back to their stylish, winning ways.

A hard fought win for Barcelona in the end as Las Palmas players can only look on while Neymar seals the match [Lajmi.net]

Bravo: 6- Kept alert and made good saves as well as interceptions as he was far busier than usual with Las Palmas

Dani Alves: 4- Good work down the wing but was guilty of getting on the wrong side of Willian José when he scored

Mascherano: 4- Sat back a little too much and couldn’t get many of his passes right, can be forgiven since he’s not a natural center-back

Mathieu: 4- Also sat back too much, but this time couldn’t get many challenges correct either

Jordi Alba: 5- Pure pace down the wing and was the provider to Iniesta’s assist to Suarez, but was also guilty of some defensive mistakes

Arda Turan: 3- Barcelona’s signing isn’t getting comfortable at the club, shown at his well-below average display at Las Palmas, struggling to keep up with his teammates

Iniesta: 7- great passing, shown by his assist to Suarez, and exhibited solid technique and vision throughout the game

Neymar: 5- Although he did finish the winning goal, he didn’t have much to look back on in terms of good chances

Messi: 5- Up to his usual tricks and techniques, but wasn’t able to make as big of an impact as he frequently does

Vermaelen: 5- Solid defense after coming on in the 70th minute especially after making a crucial interception in the last minutes of the match