Everton struggled to find the back of the net, despite having 34 shots (6 on target) and 76% possession. Roberto Martinez’s side looked the better team for the entire game, expect the first 15 minutes. Everton had 14 corners, but only forced Ben Foster to make 6 saves. West Brom needed only 1 corner to score, with Olsson flicking the ball onto Rondon’s chest in the 15th minute. After conceding, Martinez’s side looked promising as Aaron Lennon had a couple great attacking runs. However, watching the game, I noticed that Everton tried to use Romelu Lukaku too many times. Lukaku, to his credit, is a great striker with 16 goals this season, but Everton players were forcing passes into him. Everton’s best chance came very late in the game with Ross Barkley playing a lovely 1-2 with Lukaku. However Barkley skied the ball over the cross-bar, surprising many Everton fans. Barkley has been magic for Everton this season, but the 22-year-old lacked composure late in the game. All credit to West Brom though. West Brom defended extremely well and played “lock up shop” football. Jonny Evans made a crucial block on a Gareth Barry shot from inside the box. Everton have struggled in the last two months to win games, only taking 3 points in 2 of their last 7 games. Many people believe that this year’s Everton side is the best team the club has had in awhile, however Martinez needs to find a way to win games if his club wants to finish in the top 5.

Robles: 5.0 – The Everton goalkeeper only had to deal with one West Brom shot on goal, however he couldn’t reach the corner kick and Rondon was able to score. Robles will be mad that he had a 0% save to shots on goal percentage.

Seamus Coleman: 6.0 – Coleman had 6 shots but only 1 on target. He wasted a lot of chances. However, at times, he linked up with Lennon often during the game.

Phil Jagielka: 5.0 – Jagielka’s distribution was poor during the game, but he made a few good tackles.

Funes Mori: 6.0 – Mori had to defend Olsson on West Brom’s corner that lead to Rondon’s goal. Unfortunately for the Argentine, Olsson broke free and flicked the ball into Rondon’s path. With that being said, Mori had a header cleared off the line and made some key interceptions to limit the score to only 1-0.

Bryan Oviedo: 6.0 – Oviedo put in a couple of good crosses, however his teammates couldn’t make the best of those opportunities. West Brom attacked very centrally so Oviedo didn’t have to do much defending. Oviedo wasn’t the best going forward either.

James McCarthy: 5.0 – I really like the defensive work that McCarthy provides for Everton, however when it comes to breaking a team down, McCarthy struggles. He just can’t make those important passes that can release his teammates into space.

Gareth Barry: 7.0 – Barry looked very good today, and to Everton fans’ surprise. Barry played very tidy defense and even though he was booked in the 64th minute, his foul prevented a 4 on 1 counter from West Brom. Barry also had a shot blocked by Jonny Evans in the 79th minute.

Aaron Lennon: 7.0 – Lennon, other than Barry, was the only Everton player that challenged West Brom’s defense. He made some long attacking runs

Tom Cleverley: 5.0 – Cleverley did not play the way he had been playing all season. He was out paced by West Brom’s midfielders and was subbed off for Kone.

Romelu Lukaku: 5.0 – Everton tried to play the ball into Lukaku too many times. It is easy for a team to defend one player. Lukaku couldn’t get into any space due to the brilliant job Olsson did while defending the Belgian striker..

Arouna Kone: 5.0 – Kone was subbed on to try and score the equalizer, however he couldn’t get into the space that he need to. Kone is not a natural winger and it showed today as he struggled to create space for himself and his teammates. 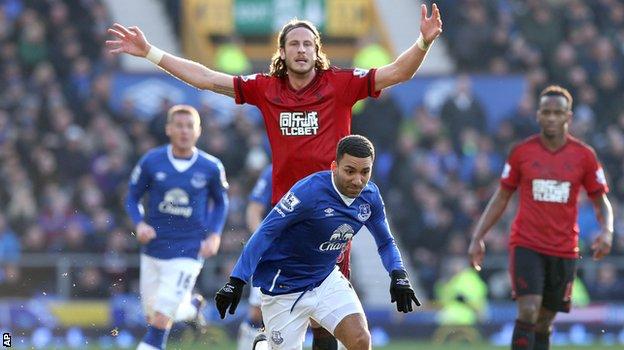 Lennon was able to attack West Brom’s defense and create good chances for his teammates, however Everton failed to convert any of their chances. [BBC]