The first 20 minutes were a display of solid, average football by both sides.  D’Ambrosio broke through in the 23rd minute off a low cross from Biabiany on the right side.  Inter held on into the half with the small 1-0 advantage.  They were not necessarily the better side, but Sampdoria only seemed to threaten Inter with sporadic set pieces.  In the 57th minute, inter doubled their lead off a corner kick, with Miranda able to apply the finishing touch with his noggin.  Viviano got a hand to it, but the ball was deemed by the line judge to have already crossed the line.

Inter tacked on another on a fast break in the 73rd minute.  Mauro Icardi streaked clear through the defense, and tucked away a rolling finish past Viviano. Inter dominated for the rest of the match.  However, in the 2nd minute of stoppage time, Muriel fed the ball to Quagliarella at the edge of the box, who fired a low, unsaveable shot to the far corner.  With the 3 points from the win, Inter remained in 4th place in the Seria A, 1 point behind Fiorentina.  Sampdoria, gaining 0 points, remains at the lower end of the table, in 17th.

Somewhat overzealous in his defensive duties, making a few strong challenges. Scored the second when he dived into the ball to send it over the line, despite the initial protests from the Sampdoria players.

Struggled to shake off Matias Silvestre and didn’t see an awful lot of the ball. However, he took the one opportunity that came his way tapping the ball past Emiliano Viviano to punish his former side.

Barely had a touch of the ball, only needing to make an intelligent stop in the opening minutes to stop Fabio Quagliarella catching him by surprise. Couldn’t preserve his clean sheet when Quagliarella eventually got the better of him. 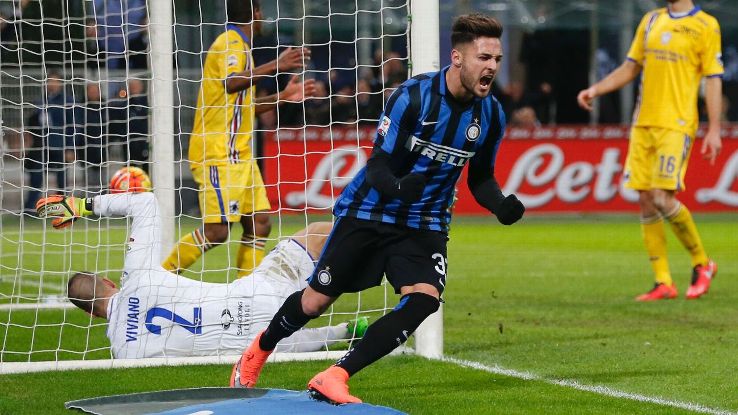