June 21st will without a doubt be the most important game that the United States Men’s National Team will play. The 23-man squad of underdogs will have to face the powerhouse that is Argentina in the semifinals of the Copa America. The game starts at 9:00 PM ET.

Many fans were not impressed with how the US team started the tournament, suffering a 2-0 loss to Colombia. During the game, fans could not help but watch their team struggle to defend and create chances. The Stars and Stripes only had 2 shots on target, putting out a lackluster 17% shot efficiency. After the game, fans were calling for Jurgen Klinsmann’s resignation stating that he has failed to win big games in big tournaments. 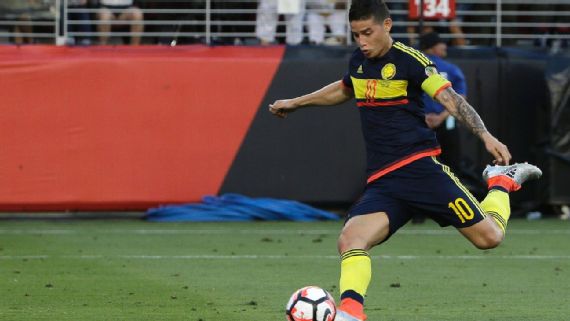 Rodriguez scores from the penalty spot to put Colombia up 2-0 against the US. [Espnfc.com]

Flash forward four days and the USMNT plays Costa Rica. Klinsmann faced huge pressure from fans criticizing his decision to not change the lineup that faced Colombia. In a tournament where teams play multiple games with little time in between, it is important as a coach to give players a rest so that they do not get injured or exhausted. A perfect example is Alejandro Bedoya. The technically-gifted midfielder was subbed off after struggling to keep up with the pace of the game. The USMNT blew Costa Rica out of the water, winning by a margin of four goals. Clint Dempsey lead the team to victory, scoring a penalty and assisting Jermaine Jones and Bobby Wood. Fans were excited to see their national team win a crucial game in their home nation.

The final game of the group stage for the United States was June 11th. The Yanks faced Paraguay, a physical team lead by midfielder Victor Ayala. The men’s national team got off to a great start with Clint Dempsey scoring his second goal of the tournament. The goal was created by winger Gyasi Zardes playing a beautiful cross into the penalty area, which Dempsey hammered into the back of the goal. In the second half, American fans were shocked when DeAndre Yedlin was given a second yellow and sent off. Yedlin has been a tough player to root for as a fan of the USA. He is not the strongest defender and is a perfect example of Klinsmann’s obsession with fast players over technically gifted players. DeAndre received two yellow cards in under a minute and shows how Klinsmann does not pick players who are composed. Players like Yedlin and Jermaine Jones have been basket cases to say the least in the tournament. Klinsmann’s squad finally showed their ability to grind out a win against a tough team. However, the US’ struggle late in the game was in part due to Klinsmann’s decision to take out Clint Dempsey. Klinsmann was forced to sub Dempsey out because the striker had already played the majority of the previous two games. Subbing out a physical player like Dempsey who has the ability to control the tempo of the game and hold onto the ball in the final minutes of a game is a big mistake and almost cost Klinsmann the win.

John Brooks makes a sliding block to stop a 3 on 1 counterattack for Paraguay. His tackle saved the US three points. [espnfc.com]

The USMNT won their group and moved onto the knockout rounds, after being saved by John Brooks’ amazing game against Paraguay. They faced Ecuador, a team that came in second in their group. The game was chippy from the very beginning. However, the United States found themselves a goal up after 22 minutes when Clint Dempsey rose above the Ecuadorian players and smashed in a header. 30 minutes later, both Ecuador and the US found themselves down a man. Antonio Valencia was shown a second yellow after kicking Alejandro Bedoya out of frustration. As players pushed each other out of the way and crowded the referee, Jermaine Jones hit Michael Arroyo in the jaw. Jones is famous for being the player that will break up play and is not afraid to commit a foul in order to stop a counter attack. However, Jones was not involved in the play in which Valencia fouled Bedoya. His hot-head mentality will cost the US when they play Argentina. 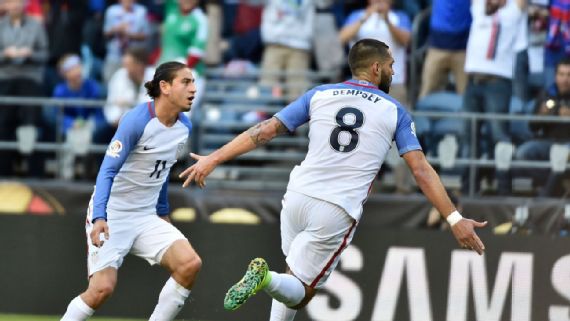 At this point, you may be thinking that I do not believe that the United States has a chance against Argentina, however that is not true. The United States is one of the most physical teams left in the Copa America. Add that to the fact that the tournament is being played in the US and the USMNT has a good chance to keep the game close. Brad Guzan has looked like Tim Howard two years ago, when the former USMNT #1 set the World Cup record for most saves in a single game (16). John Brooks has lead an impenetrable defense and captain Michael Bradley has shown great leadership throughout the tournament. However, Argentina will not play nice with the United States. Messi and his teammates are looking to end a 23-year drought this year. Players like Messi, Aguero, Higuain, and Di Maria will be hard for the US to stop, but fans should have faith in Brad Guzan and the United States’ defense.

Keys for the United States: