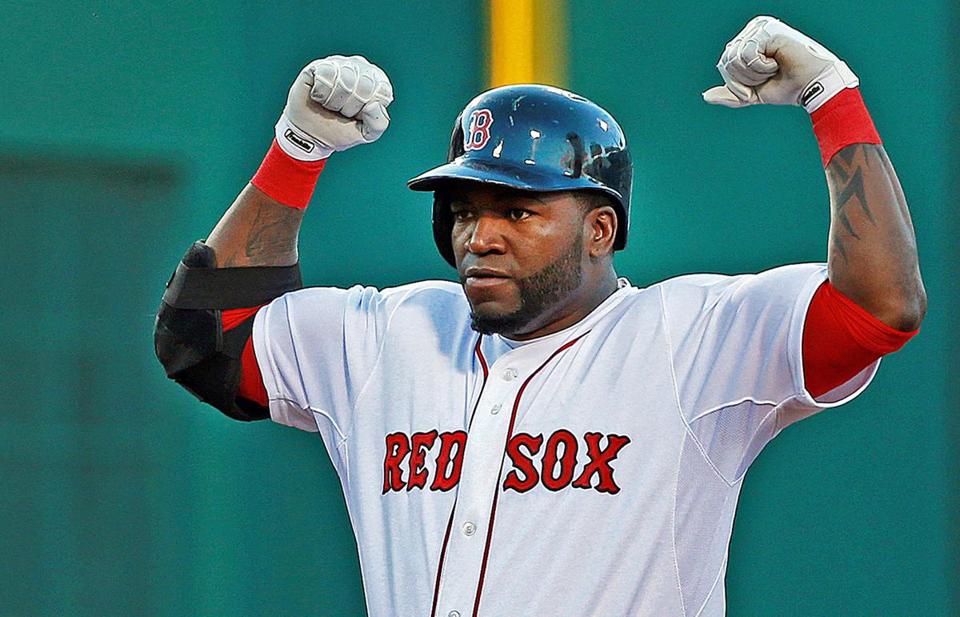 David “Big Papi” Ortiz is one of the most polarizing ballplayers of his era. Although he is a rival to some, he is an idol to many others. In order to fully realize what the man referred to as “Big Daddy” has done for the game of baseball, it is essential to start from the beginning. David Américo Ortiz Arias was born on November 18, 1975 in Santo Domingo, Dominican Republic, an MLB-producing powerhouse. Flash forward twenty-two years, and a man by the name of David Ortiz steps up to bat for the Minnesota Twins for the first time in his big league career. Zoom ahead five years later. Even though he hit a solid twenty home runs for the Twins in the 2002 season, the team released him at the end of that year. During that offseason, free-agent Ortiz was signed by the Boston Red Sox. This is where his story truly begins.

In 2003, Ortiz had his breakout season, and it almost didn’t happen. For the first two months or so of the season, he was mainly used as a pinch-hitter. All of that changed when he became the starting designated hitter over Jeremy Giambi. Despite playing inconsistently the first two months of the season, David finished with the numbers of someone who played all 162 games. He hit .288, with thirty-one home runs and 101 RBI. The Red Sox almost made it to the World Series that year, but fell short in the American League Championship Series (ALCS) against the rival Yankees of New York. Because of the large impact that Ortiz had on his team that year, he finished in fifth place in the Most Valuable Player (MVP) ballot.

The next year, 2004, was arguably the most important and remembered year for the Red Sox in franchise history. Eighty-six years before was the last time the Red Sox had won a World Series. After coming so close the year before to making it to baseball’s championship series, the Red Sox were more than eager to get back at the Yankees for ending their playoff hopes during the prior season. After a terrific campaign the year before, Ortiz somehow managed to top his heroics. He made his first career All-Star team and it was well-deserved; he hit .301, with forty-one home runs and 139 RBI. He also finished fourth in the MVP voting. While those numbers are phenomenal, he somehow eclipsed those in the playoffs. He went on a tear that postseason, hitting .409, with five home runs and twenty-three RBI. In the ALCS, it was a rematch of the series from a year before, with the Red Sox taking on the Yankees. After falling behind three games to none, it seemed as though the season was over for Boston. Ortiz had plans of his own. He hit walk-offs in both of the next two games. After the Red Sox ultimately won the series, Ortiz was given the honors of ALCS MVP, the first time that distinction was given to a designated hitter. After that, he continued his playoff surge in the World Series, hitting .308, as the Saint Louis Cardinals got swept by the Red Sox in four games. This was the first time the Red Sox had won the World Series since 1918, ending one of the longest championship droughts in all of sports. 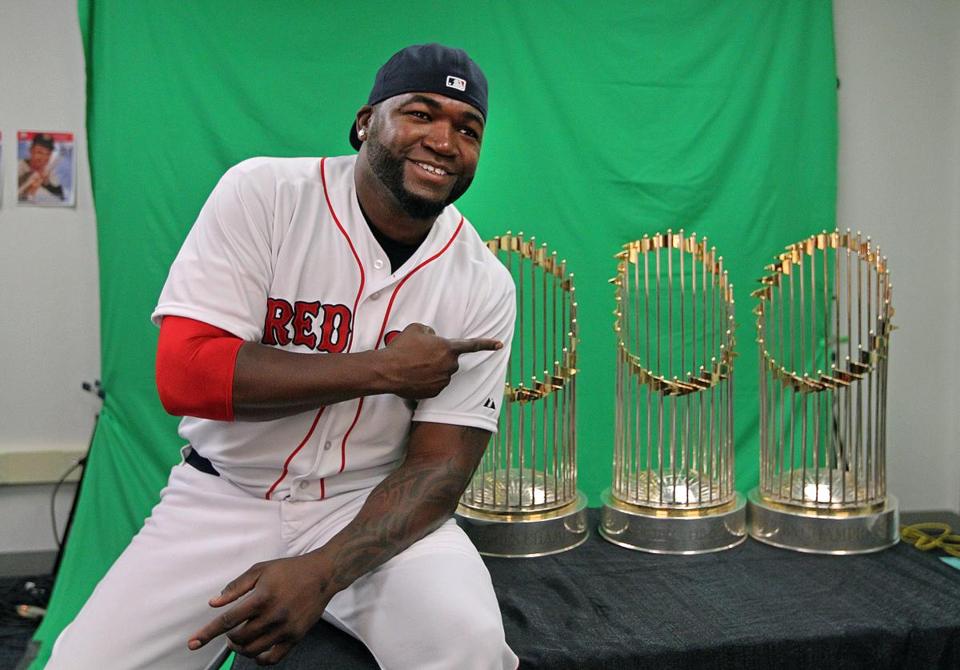 The following year, 2005, Ortiz did not show any signs of slowing down. He hit .300, with forty-seven home runs and 148 RBI. An interesting note: the Red Sox declared Ortiz “the greatest clutch-hitter in the history of the Boston Red Sox” before the season started, after playing less than two full seasons with the team. Ortiz was announced the runner-up in the MVP voting, with only rival power-hitter Alex Rodriguez receiving more votes.

2006 was, unsurprisingly, another big year for Big Papi. This year he hit fifty-four home runs, both a personal and a club record. Not only that, but that is also the most ever in a season by a designated hitter. He also hit .287, with 137 RBI. He came in third in the MVP voting, which was a surprise to some, considering the records he broke that year. Also, he hit the 200th home run of his career at the age of thirty-one, and only 335 other people have done that in their entire careers.

Ortiz had another monster year in 2007, helping the Red Sox win their seventh World Series. He hit .332, which equates to almost one hit per three at bats. Besides that unusually high number for a power hitter, he hit thirty-five home runs and 117 RBI. Although he finished in “only” fourth in the MVP voting, he had yet another breathtaking playoff run. He hit .370, with three home runs and ten RBI. Even though he had put up better numbers in the past during the postseason, this was still enough to win the city of Boston its second World Series victory in four years.

To say that 2008 was an off-year for Ortiz would be true, but he still put up above-average numbers that year. He missed fifty-three games that season, so of course he was unable to put up the incredible numbers that were possibly unfairly expected of him. He hit .264, which while not his best, was still respectable. In addition to that, he hit twenty-three home runs and eighty-nine RBI.

2009 was another so-so season for David. The first thirty-four games, he was in a horrific slump, hitting slightly above the Mendoza Line at .206. He hit zero home runs and recorded thirty strikeouts during this slump. He finally found his groove, as he finished the season with twenty-eight home runs and ninety-nine RBI. One thing that he was unable to raise significantly was his average, as he hit a mere .238. Despite it not being his best season, he still reached some impressive milestones. He hit his 300th career home run, a feat only matched by only 140 others. He also hit his 270th career home run from the position of designated hitter, a distinction that he shares with no one.

In 2010, Ortiz had another amazing season. Finally healthy, Ortiz was able to produce in the same way he had, only a few years before. He hit thirty-two home runs that year, finishing in the top ten in the American League. In addition, he hit 102 RBI, also finishing in the top ten. He hit .270, a mark higher than the previous season and the one before that. Thanks to his display of power, he was chosen to participate in the Home Run Derby. He beat future teammate Hanley Ramírez, winning his first career derby.

2011 was another unbelievable year for Big Papi. He hit .309, ending his three-year drought of hitting below .300. He also hit twenty-nine home runs, and ninety-six RBI. During the season, he passed Edgar Martínez for the most career RBI for a designated hitter, getting his 1,004th RBI of his career. Ortiz also was the recipient of the Roberto Clemente Award. This honor goes to the baseball player that “best exemplifies the game of baseball, sportsmanship, community involvement and the individual’s contribution to his team.” This is a tremendous recognition, as only one player receives this award per year.

In 2012, David Ortiz hit his 400th career home run. This distinction is something he shares with only fifty-four other people. Only one other active player, the Angels’ Albert Pujols, has more than Ortiz. Despite playing only ninety games, Big Papi still had a great year. He kept his batting up that season, hitting .318. He also hit twenty-three home runs and got sixty RBI. 2013 was perhaps the most important year in his career, not just on the field, but off of it as well. At the first game at Fenway Park since the awful Boston Marathon bombings, Ortiz spoke to the crowd. He told the crowd that the city of Boston was stronger than terrorism. That moment may have been one of the most iconic and emotional examples of an athlete helping those in his community. On the field, he was not too shabby either. He hit .309, with thirty home runs and 103 RBI. In the postseason, he was as clutch as clutch can be. Ortiz hit .353, with five home runs and thirteen RBI. He hit two home runs in the World Series alone, earning himself the role of World Series MVP. He became the designated hitter with the most career hits, passing Harold Baines after he hit his 1,689th hit.

In 2014, Ortiz proved himself to be a major run-producer, hitting .263, with thirty-five home runs and 104 RBI. Carl “Yaz” Yastrzemski also said that he considered Ortiz the second-best hitter in the history of the Red Sox. The Red Sox have been no stranger to electrifying hitters, including Ortiz, Yaz, and Ted Williams among others. It is important to note that Big Papi has the most career home runs of any Red Sox player. While Babe Ruth does have more career home runs, he played primarily as a pitcher for Boston.

In 2015, Ortiz had yet another big year at the plate. He hit .273, with thirty-seven home runs and 108 RBI. The “Franchise Four” is the name that was given to the players that were considered the best in the history of the Red Sox. The players given this honor were announced in 2015 and included: Ortiz, Pedro Martinez, Ted Williams, and Carl Yastrzemski. He also hit his 500th career home run, putting him in humbling company. Only twenty-five other players have ever reached this career landmark.

Ortiz announced that the 2016 season would be his final one. The reason for this is not because he was unable to put up the numbers to continue playing, but because he said that his feet hurt him too much to keep playing. In his final regular season, Ortiz hit .315, with thirty-eight home runs and 127 RBI. Those numbers are monstrous for any player, but for Ortiz to do it at the age of forty puts him in a category all to himself. Thanks to those impressive numbers, Big Papi set multiple records. One example of this is being the oldest player in MLB history to hit thirty home runs in a season. Also, this was the tenth time he hit at least thirty home runs and 100 RBI, which is a Boston Red Sox record. In recognition of his unbelievable career, he received two incredible honors towards the end of the season. One of these was that the Red Sox announced that the number thirty-four would never be worn by another Red Sox player. He became the eleventh player to have his number retired by the Red Sox, one of which is Jackie Robinson, who never played for the club. Another prestigious honor bestowed upon Ortiz was given to him by the governor of Massachusetts, Charlie Baker. Governor Baker announced on October 2 that a nearby bridge would be dedicated to Ortiz. In terms of how he will fare in the postseason, that has yet to occur.

The National Baseball Hall of Fame is meant for those who have bettered the game during their careers. Someone who plays well on the field but can’t handle himself off the field does not have a good chance of getting in. The Hall of Fame is for the best of the best, both in terms of character and play. Based on that criteria, David Ortiz should be able to make it in. Considered by many to be one of the most clutch hitters the game has ever seen, his legacy doesn’t end there. He was a symbol of hope for the victims and the families of victims of the Boston Marathon bombing, and that shows that he was more than a player; he was a legend. David Ortiz should certainly make it into the Baseball Hall of Fame because of all of his efforts to make the baseball world a better place.