The Braves rebuild continued in 2016 as the team dropped 93 games finishing in the NL East cellar. Though the Braves did take some steps forward as they played their best baseball in the season’s final months.The Braves struggled to get runners home in 2016 as the team finished second worst in all of baseball only ahead of NL East rival Philadelphia  in runs scored. Again however there was a few bright spots in the Braves offense that should carry over to help the team improve heading into 2017. Freddie Freeman quietly put up MVP like numbers hitting .302, with 34 homers, and 91 RBIs as the proved to be the face of the Brave franchise. The Braves Also got great production from mid season acquisition Matt Kemp. Kemp after coming over from San Diego hit 12 Home Runs, a d  batted .280 in his 56 games in a Brave uniform. If Kemp can provide the same production as he did in his small sample size as a Brave he can play a big role for Atlanta in 2017 and beyond. Lastly Braves country got something to smile about with number one prospect Dansby Swanson very impressive first 38 big league games. The youngster hit .302 with three homers and 17 RBI’s in his brief MLB appearance and will take over full time at Shortstop for Atlanta in 2017 as he hopes to move the Braves rebuild along quickly. Though this Braves offense is not at all indicating due to the many holes it’s hard to  imagine they finish 29th in runs scored again. The Braves rotation also finished second worst in the major but instead of calling up their young prospects to the majors off the bat in 2017 Atlanta took the veteran approach. The Braves signed the two oldest starters in the Majors in 43 year old fan favorite and 2016 All Star Bartolo Colon along with 42 year old knuckle baller R.A. Dickey. These arms are likely just to fill the rotation gaps for the 2017 season but should provide some production and maybe help the Braves further bolster their farm system come trade deadline time. The Braves also traded for veteran Jamie Garcia from St Louis proving that they don’t trust their young arms thus yet. These three veterans will join Julio Teheran coming off a bounce back 2016 pitching to a solid 3.21 ERA, and Mike Foltynewicz who did not have great numbers but did show some promise in 2016. All in all this rotation should be much better than it was last season but is is possible ⅗ of the starters currently ready to go for the Braves are pitching elsewhere come July. The Braves bullpen quietly finished middle of the pack a season ago with the 14th ranked bullpen ERA in the majors. Once a 50 save man in Baltimore Jim Johnson pitched well  in 2016 pitching to a 3.04 ERA, converting on 20/23 save opportunities. Johnson will provide good experience at the back end of the pen again in 2017 for Atlanta. Mauricio Cabrera also stepped up as a solid late inning option for the Braves as the 23 year old pitched to a 2.82 ERA. The Braves bullpen lacks any big household names but with little turnover it should put up similar numbers to the pen that finished 14th a year ago. Atlanta is not a team ready to be a serious contender but they are getting closer. Moving into a new ballpark the Braves rebuild is one of the more fun ones to watch and players like Dansby Swanson are what should draw folks to the beautiful new stadium and keep their eyes on the Braves in 2017. 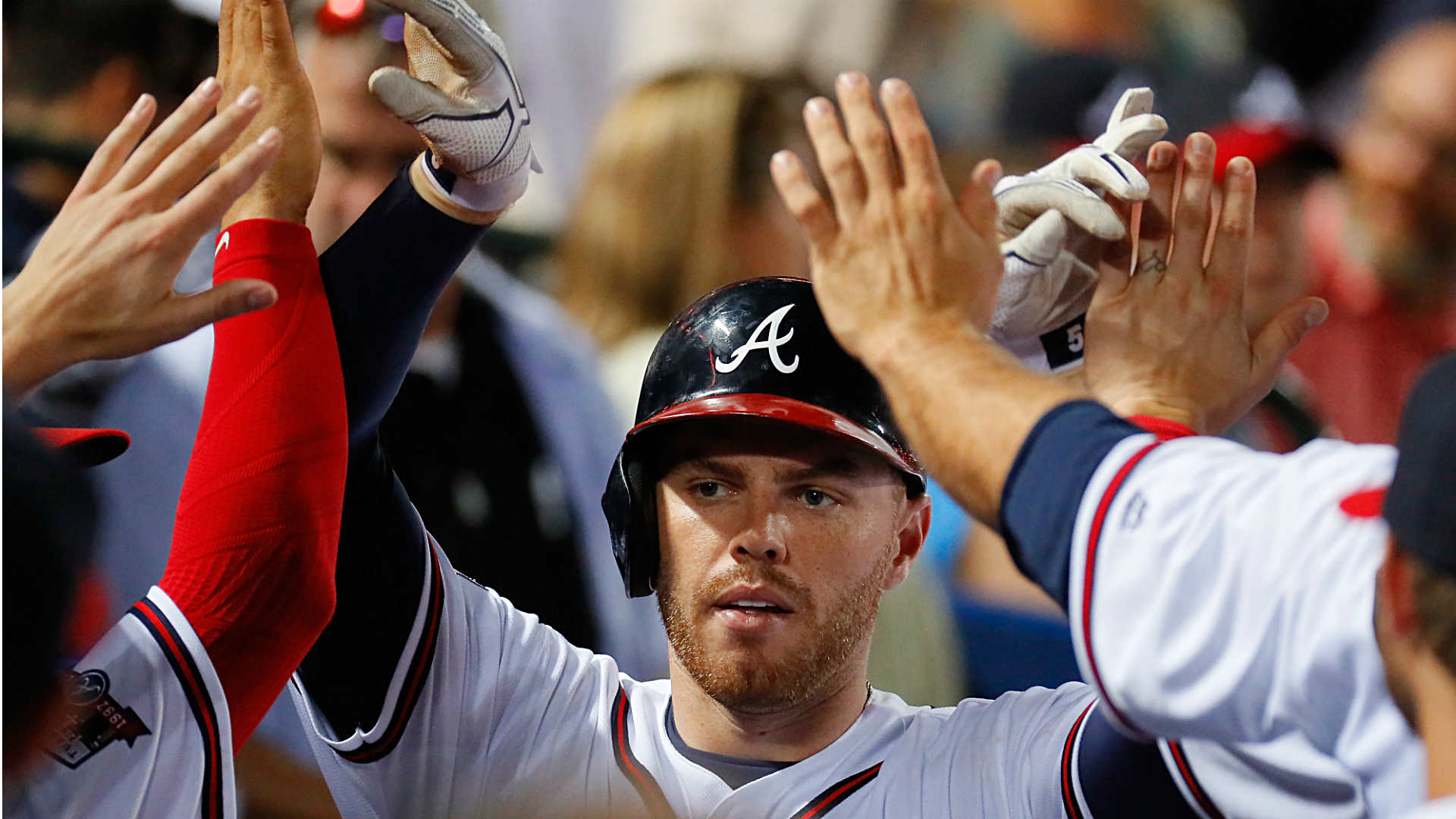 Freddie Freeman quietly had an MVP like season in 2016. (Getty Images)