The Red Sox are primed for an exciting year. David Ortiz’s pending retirement is obviously not something Red Sox fans want to think about, but it may end up being a motivational factor for Papi to end his career on top. The front office went out this winter focused on getting the best players available for the team’s holes, no matter the cost. Now that the team has an ace, formidable bullpen, a well rounded lineup, and great depth, this team could potentially be among the best in the league. Many questions remain, but the front office has made sure to cover all bases and now it is just about folding the corners. 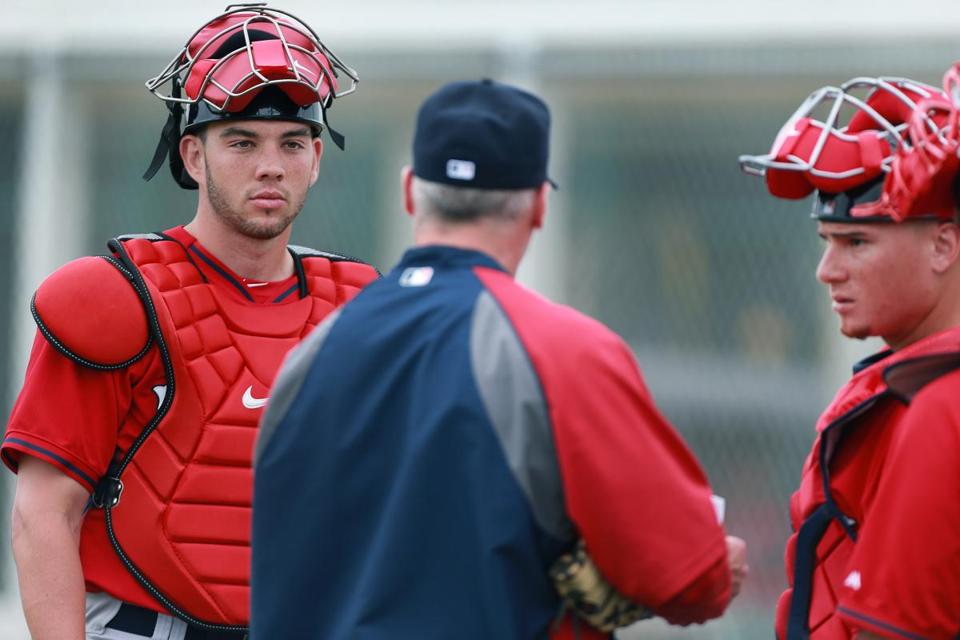 John Farrell recently stated that if the season started today Swihart would be the starting catcher over the veteran Hanigan and rehabbing Christian Vasquez. In his rookie year Swihart hit .274 with 5 HR and 31 RBIs. These are respectable numbers from a rookie, but his potential obviously vastly exceeds his production to date. Swihart is expected to become an above average major league hitter. His one flaw as of now is that his defensive production has been sub-par to this point. He will surely work to improve this but he is outmatched defensively by Christian Vasquez. Vasquez was written in as the starting catcher prior to 2015 when he hurt his elbow requiring Tommy John surgery. He should come back and perhaps share some of the responsibility. Hanigan will serve as the veteran backup as was the intention last year prior to Vasquez’s injury. He may, however, be the personal catcher for Rick Porcello who had his best success last season pitching to Hanigan.

Hanley Ramirez at first base is the biggest question mark for the season thus far. He will arrive early to Florida with the pitchers and catchers to begin learning the position. As a career infielder it is expected that the transition go smoothly, or at least smoother than last year’s left field experiment. The move is also projected to increase his health and offensive numbers. He put up below average numbers by his standards in almost every category batting only .249 with 19HR and 53RBIs. These should improve but his transition is something to watch in spring training. Travis Shaw came onto the scene late and truly impressed with his consistent hard contact and production. Shaw should get plenty of at bats this season. While Hanley will see a majority of the time at first, Shaw will play in replacement often. Allen Craig is a non-roster invite after getting outrighted to AAA last season. He is a veteran who has had major success being given a last chance to prove he can still play at a high level. While his future is most likely not with the Red Sox, he can use spring training to prove to other teams he still can hit major league pitching.

Pedroia is a former AL ROY, MVP, and 2 time World Series champion. But the Red Sox’ Captain is getting older and cannot play the same amount as he previously could. A healthy Pedroia will produce all-star, perhaps even MVP, worthy numbers. But it is unrealistic to count on him for 162 games and the postseason. That is one of the many reasons why 2015 All-Star Brock Holt will prove so vital to this team’s success. Holt should play all around the infield and outfield getting many at-bats and contributing offensively. Coming off an all-star season in which he had many highlights such as his cycle on June 16th (video above, mlb.com), Holt is primed to contribute once again. Josh Rutledge came over from the Angels at the deadline in return for Shane Victorino and contributed as an excellent defender at both 2B and 3B. He should start the year as minor league depth but could see time if the Sox were to sustain injury in the infield.

The Panda has lost weight! According to John Farrell the big third-basemen has lost about 20 pounds. This season Sandoval looks to get back on track after an unproductive first year in Boston only posting a .245 average with 10 HR and 47RBIs. He has proved before that he can be a quality defender and a productive hitter in the middle of a lineup. He along with fellow veteran Hanley Ramirez will look to have bounce-back seasons and prove the Sox right for signing him a year ago.

There aren’t too many 23 year-olds that are a sure thing. However, after putting up monster numbers to the tune of a .320 average, 7HRs, 81RBIs, and 10SBs, winning the AL Shortstop Silver slugger award, and being awarded team MVP at the Boston Baseball Writers Dinner, ‘Bogey’ could probably book his plane ticket now to San Diego for the All-Star game. However, he could make even more noise than that. After a rookie season that saw him post 12HRs, and three years in the minors in which he surpassed 15HRs, he could see an increase in his homers in 2016. He changed his approach in 2015 from pulling the ball consistently to opposite field hitting in a very ‘Jeter-esque’ style. This saw a spike in his average all the way to .320. We may see his average drop this year to the .300 range but his power numbers should go up. However, if Bogaerts can put it all together by maintaining his average and adding power while continuing his defensive improvement, we could be talking about not just an all-star but an MVP candidate. Marrero represents the only other shortstop in the Red Sox system with major league experience. The Red Sox seem content to relay on Brock Holt as the backup but should there be an infield injury Marrero may have the upper hand to Rutledge because of his great defensive ability at shortstop.

How the outfield playing time pans out should be interesting to see. The only sure thing here is Mookie Betts. Betts came onto the scene in the middle on 2014 and hasn’t looked back since. He now ranks among the best in the league both offensively and defensively. As the future face of the franchise, Betts will look to not just match but improve upon his great 2015. In fact he could have a truly special season…

This is a good sleeper MVP candidate behind the usual suspects of Trout, Cabrera, Donaldson: Mookie Betts, who had a .923 OPS after June 10.

We’ve seen this story before, in Dustin Pedroia’s second full season he was able to win the MVP award. Pedroia also won a world series that season- just saying. These high aspirations and perhaps expectations of Betts are by all means warranted. He posted a .291 average with 18Hrs, 77RBIs, and 21SBs. Those are all-star numbers and if he can build on his great second half we could be looking at the 2016 MVP.

If Betts ends up playing right-field as expected, Jackie Bradley Jr. will take over his old spot in center-field. Bradley Jr. is known for his incredible catches, amazing range, fantastic closing speed, and superhuman arm (as can be seen in the highlight reel above via MLBPlays17 on YouTube). For years people have said if he can just hit .250 he could be a great everyday player. However, he truly showed his offensive potential in 2015. While his overall numbers were not bad posting a .249 average, 10 HRs, 43 RBIs, with an .832 OPS, it was what he did in August that was amazing. In August he put up a .354 average, 1.163 OPS, 5 HRs, and 23 RBIs. Obviously it was not realistic for him to sustain these numbers that ranked him among the top 3 hitters in the majors, but it showed great hope and promise for a revived career. He now enters this season looking to put up better numbers and regain the offensive fortitude he amassed in August 2015.

Rusney Castillo has considerably underwhelmed since being signed out of Cuba. After a year in the majors and a career that saw him switch from center-field to right-field to now left-field, he says he feels better prepared physically for the majors and has shorted his swing up. (via Twitter @PeteAbe) Late last season he seemed to perform well in front of the ‘Green Monster’ but will use the replica in Fort Myers to practice and gain experience during spring training much like Hanley did a year ago. Castillo must prove that he was worth the investment the Sox made in August of 2014 to bring him on. However, to do that he will have to focus on making consistent good contact and avoid mental errors in the outfield. If he accomplishes these tasks he should see a good season in 2016.

Chris Young is truly the last piece of the offensive puzzle for the Red Sox. He may actually prove to be a key to the Sox’ true offensive success. Young has posted a career .263/.362/.474 versus lefties in his career and according to John Farrell and the front office is expected to get ever at-bat against left-handed pitching and some against right handers. The goal is to get him appearances at Fenway where they believe his swing will play well to the Monster in left. (info via overthemonster.com) Essentially he will play a platoon or rotation role between both Jackie Bradley Jr. and Rusney Castillo. Seeing as Bradley Jr. has essentially opposite splits he is the best candidate to sit for Young but if any of them come onto the scene as Bradley did in August of 2015, they will get priority. However, there will be plenty of playing time to go around. Barring injury, there will be 480 starts to split between the 4 players. The great thing about the rotation is that all four players are  capable of playing all three outfield spots and besides Betts in LF all of them have throughout their careers. This outfield should be great both defensively and offensively in 2016.

Last, but certainly not least, is Big Papi himself, David Ortiz. The year will be one big celebration for the career that spanned 3 world series titles and many clutch hits. We’ll worry later whether he’s a Hall-of-Fame lock or not, for now it’s on to 2016 and all that comes with it. For many this will be a sad year. But Papi is committed to going out on top and the team is behind him. He looks great (via his instagram above) and is ready to produce as the cleanup hitter in the 2016 lineup. If all goes well, Papi will continue his streak of 30HR and 100RBI while keeping his batting average north of .270. If he can do all that and lead them to the playoffs at the ripe age of 40, he will even further cement himself as a Red Sox and baseball legend.

Check back soon for Part 2: The Rotation