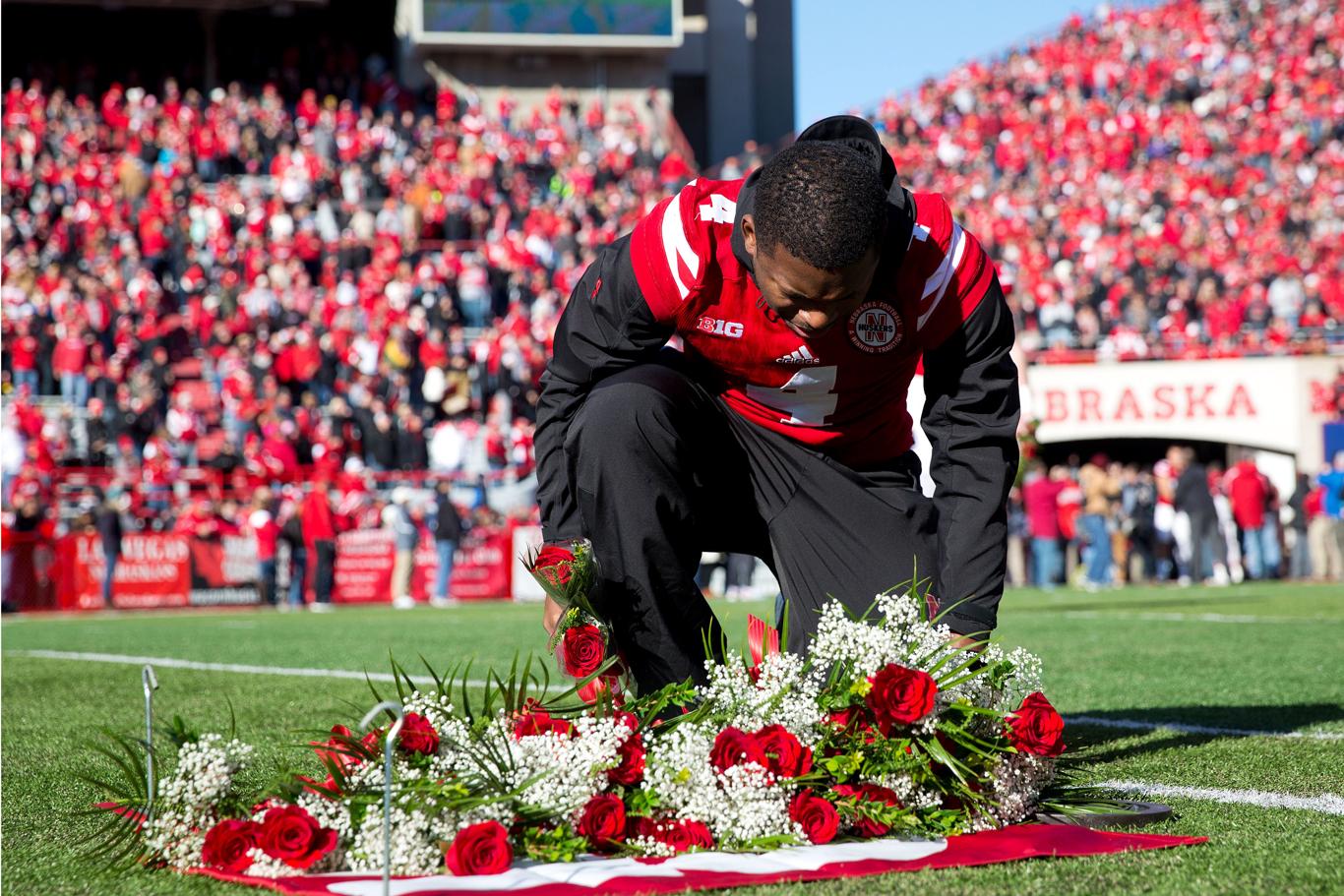 Lincoln NE- On an emotional senior day in Lincoln where the home crowd said goodbye to 27 seniors, and honored the life of late punter Sam Foltz one last time the Huskers dominated the Mayland Terrapins winning by a final of 28-7 to complete an undefeated season in Lincoln.

Pregame there was some concern for the Huskers as Senior Quarterback Tommy Armstrong Jr. who has been one of the best players in the B1G this season did not dress due to a ankle injury that he suffered a week ago in the Huskers win over Minnesota. That left backup Quarterback, and Nebraska native Ryker Fyfe made the start on his senior day making his second career start, and first start in Lincoln.

The game started off ugly for the Huskers as their place kicker Drew Brown one of the nation’s best went down on the game’s opening kickoff trying to make a tackle leaving Spencer Lindsay as the Field Goal kicker for the rest of the ball game. The defense was slow out of the gate but stopped the Terps at the Husker 28 yard line setting up a 4th and 10 where. Maryland Head Coach D.J. Durkin elected to keep his offense led by Freshman Quarterback Max Bortenschlager on the field. That decision would backfire as the 4th and 10 pass went incomplete setting up Ryker Fyfe and the Huskers. 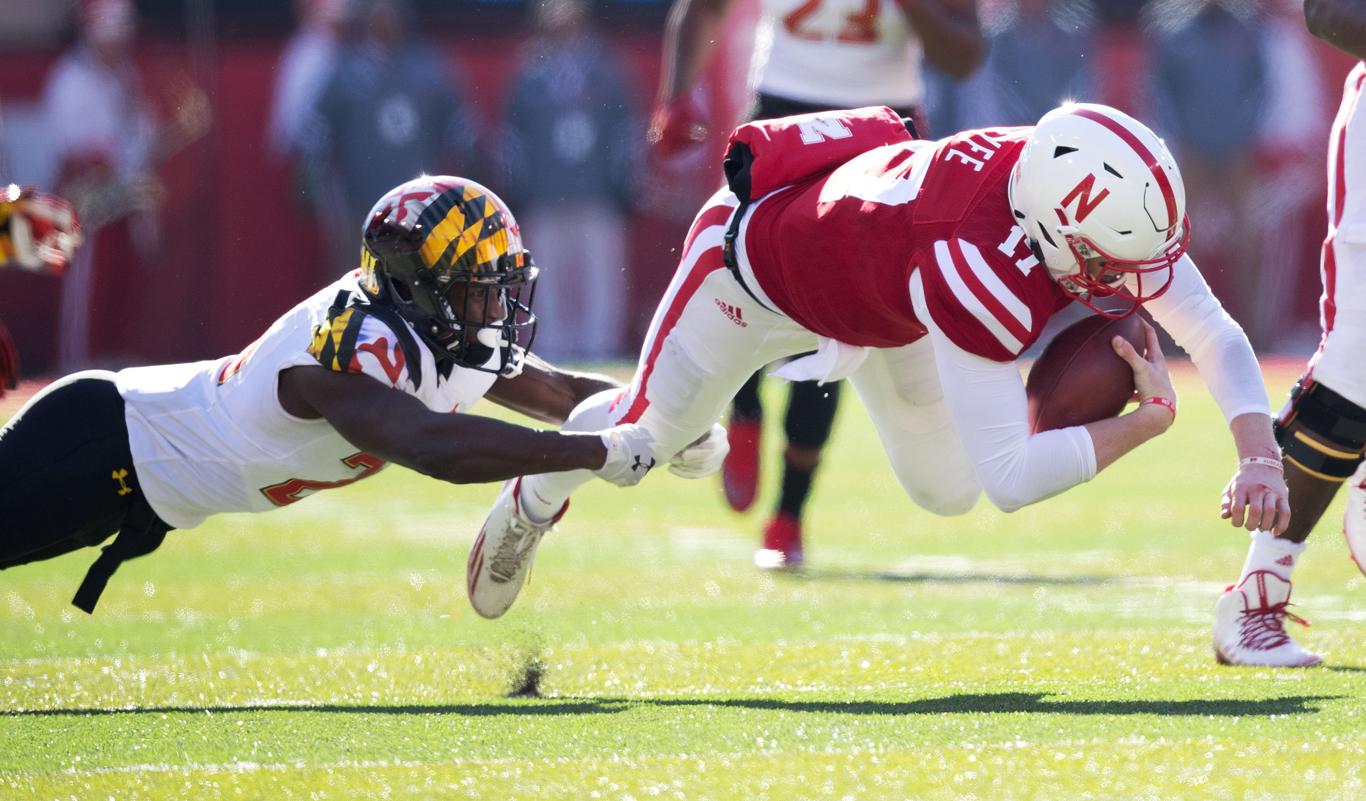 What an amazing Senior Day it was for Ryker Fyfe. (RYAN SODERLIN/THE WORLD-HERALD)

Fyfe and the offense wasted no time to show the 354th straight sold out Nebraska crowd that they’d be just fine on this senior day even without their star Quarterback. After an incomplete pass and a one yard Terrell Newby run, Fyfe showed off his arm finding Captain Jordan Westerkamp one of the best Receivers ever to play for the Huskers of a 26 yard gain to the Maryland 45 yard line. Westerkamp did however come up slow on the play, but would return on the next Husker drive. After the big play to Westerkamp the Huskers rushing attack got going as Newby ran for a ten yard gain, and following a ten yard Fyfe to Bryan Reimers hook up the Huskers hit pay dirt as the Senior Running Back Newby ran the ball in for an eight yard score giving Nebraska the early 7-0 lead. 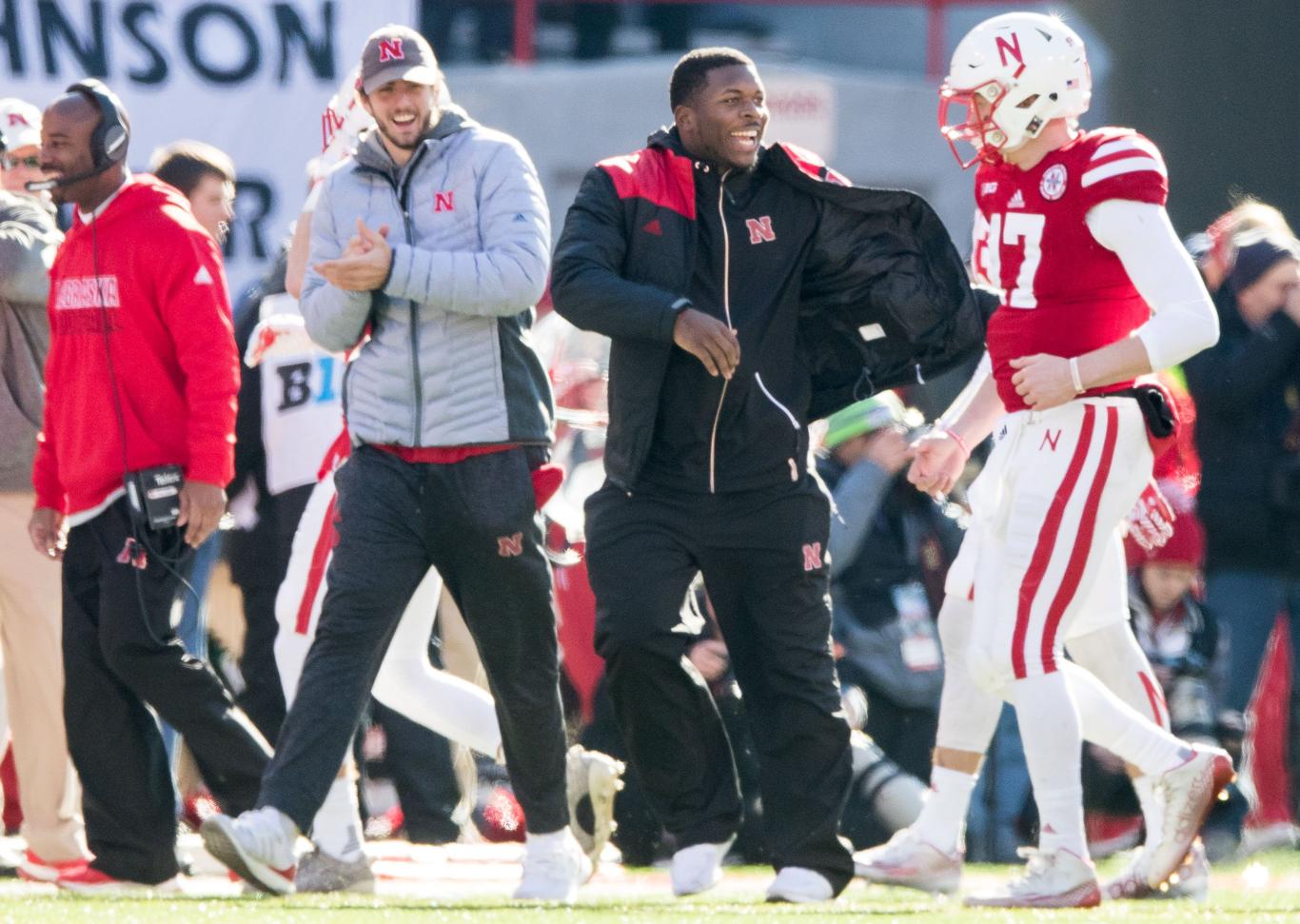 After Maryland quickly punted on their ensuing possession the Huskers seniors led the way to another scoring drive. With the ball at their own 43 the Huskers were set up in a good spot. After a five yard Newby run, Fyfe hit senior wide out Brandon Riley for a 24 yard pick up the Terp 28, Then on third and 11 Fyfe hit Westerkamp again for a 10 yard pickup and this time Mike Riley Huskers head coach choose to roll the dice and keep his offense on the field with a Fourth and One from the Maryland 19. Riley made the right call as Fyfe the opposite of Tommy Armstrong from a mobile stand point took off and picked up 14 setting up a first and goal. Newby was able to cash in on yet another Touchdown run to give Nebraska a 14-0 lead heading into the Second Quarter. 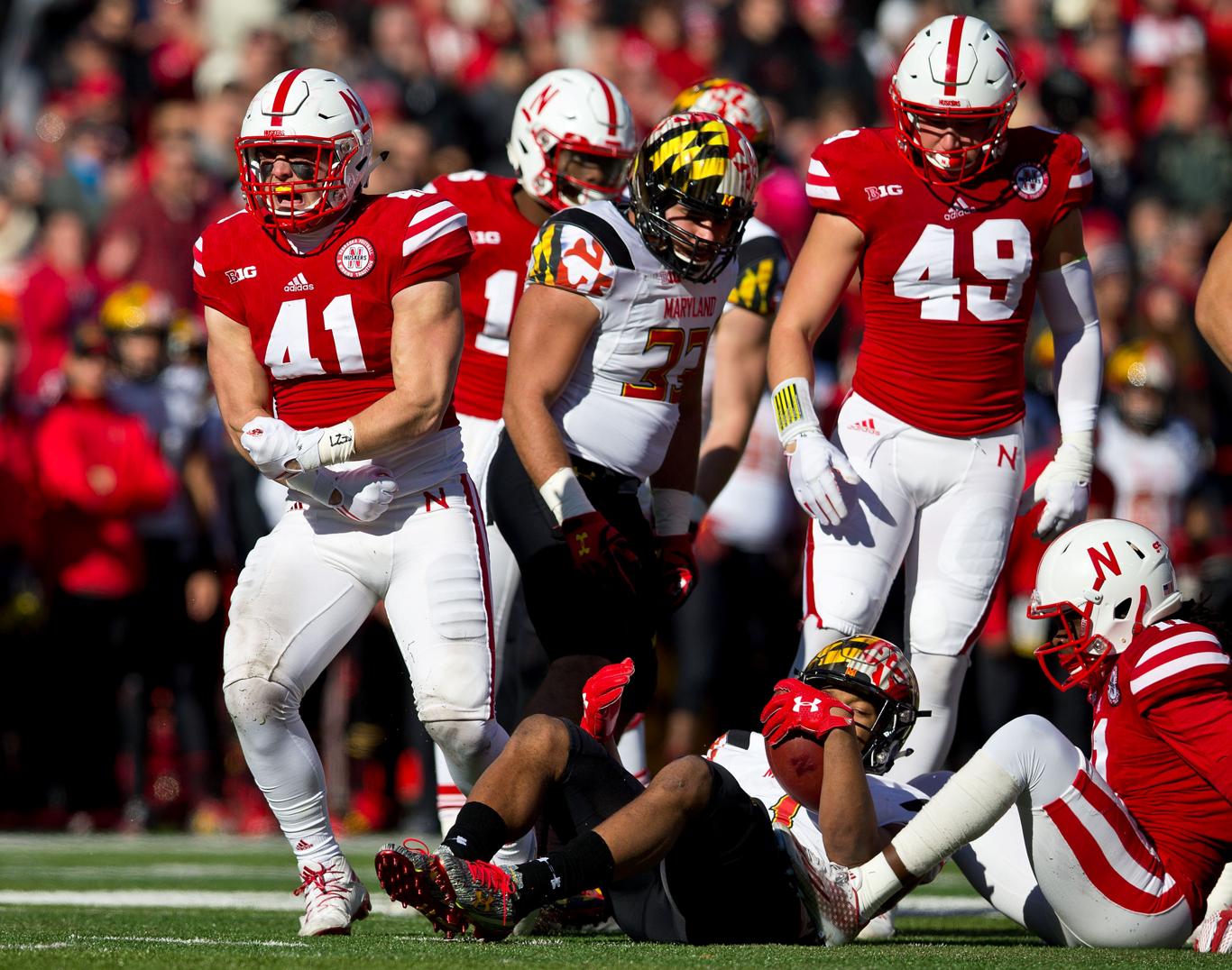 After another great stop by the Huskers defense highlighted by a five yard sack by Defense Back Aaron Williams Maryland pinned Nebraska deep with a 44 yard punt that was downed at the Huskers own three yard line. Fyfe and the Huskers however would not be discouraged. The Huskers got some breathing room after a three yard Tre Bryant run, and a six yard pass to Senior Alonzo Moore, and a 13 yard Brandon Riley run. The drive went onto the other side of the 50 after captain wide out Jordan Westerkamp on his senior day made another big play as he caught a Fyfe pass for a gain of 26 yards all the way to the Maryland 44. After a three yard Newby run, a three yard Westerkamp catch Tre Bryant the freshman took the hand off for another big game picking up 22. Then the drive stalled out as Fyfe was sacked on third down to force a fourth and 13 from the Maryland 14 yard line. Not having Drew Brown would show to be a crushing blow as the Spencer Lindsay kick was easily blocked giving Maryland the ball back. 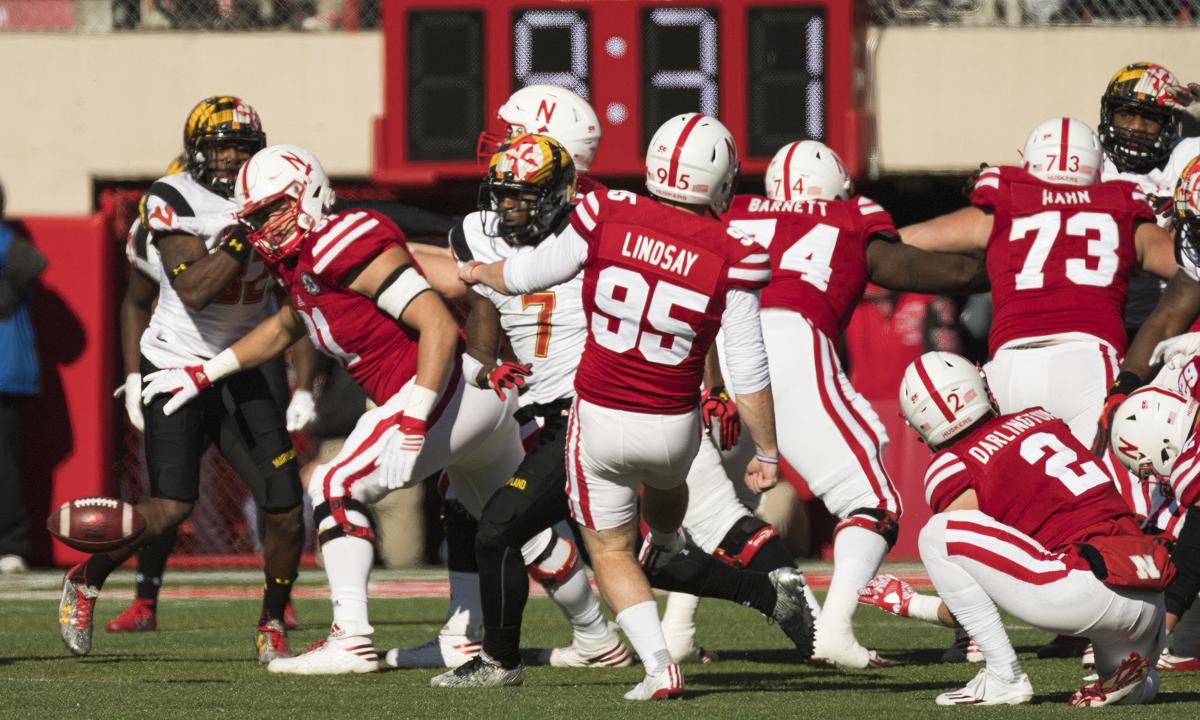 The Nebraska defense once again did their job as Maryland was quickly forced to punt giving the ball to Fyfe and the Huskers at their own 22. Fyfe and the Husker offense would have the ball for a long time. The drive kicked off on a high note when Newby ran for a gain of nine, but then Fyfe was sacked by Maryland’s Shane Cockerille for a loss of three. Needing four for the first Fyfe went back to Senior Brandon Riley to pick up six yards. After picking up 13 more yards on Newby runs, and an Alonzo Moore catch Nebraska’s offense shot themselves in the foot when a personal foul following a 13 yard catch by Tre Bryant was called for a late hit which set them back to their own 45. After a pair of incomplete passes it looked as if Nebraska would punt for the first time, but Mike Riley again kept the offense on the field. The Huskers were able to pick up a first down on fourth and nine, but not on a passing play, or a Newby run, Ryker Fyfe ran the ball for a gain of 21 a huge play setting up the Huskers at the Maryland 34.

The long drive dragged on as on third and ten following two incomplete passes another senior stepped up as Cethan Carter made a grab good for 14 yard. Defense pass interference put the Huskers in the red zone where on Second and Goal Nebraska finally found the end zone. Fyfe was able to drop in a four yard touchdown pass to Westerkamp to give Nebraska a 21-0 lead, after a nearly six minute, 16 play, and 78 yard drive. This drive left Maryland with no time as the Terps took a knee as the Huskers took the three touchdown lead into the Halftime locker room. 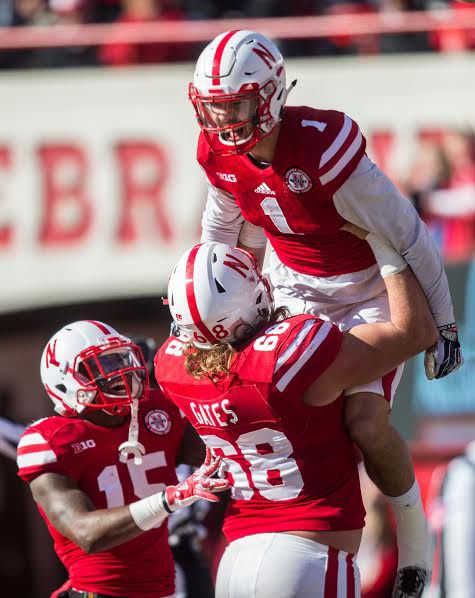 Captain Jordan Westerkamp had a big Senior Day for the Huskers. (Photo by Amber Baesler)

After a quick Nebraska three and out Nebraska’s defense got a big play of their own when Freedom Akinmoladun came in and sacked Max Bortenschlager for a loss of nine yards on third down. This would give Nebraska the ball back and again they had the ball forever.

The biggest play of the Nebraska 14 play drive was just a gain of 13 on the ground  This  drive saw a  plethora of Husker wide outs get involved. Including De’Mornay Pierson-El who had a grab, Westerkamp who  had two catches on the drive, Moore hauled one in, Riley picked up eight on one grab, and Stanley Morgan also had a one as the vetren, and young Wide Outs all got themselves involved. When all was said in done however the MVP of the game Running Back Terrell Newby was the one to finish things off running the ball in from a yard out to score his third Touchdown of the game.

The third Quarter ended with a 28-0 Nebraska lead but in the Fourth Maryland found the end zone for the first time in nearly three weeks when D.J. Moore flew around the Husker defense for an impressive 92 yard touchdown which ended the shutout.

Neither offense found the end zone again as the clock winded down, and Nebraska took the ball game of final score of 28-7. On Senior Day it was all seniors as the Husker leaders on both sides of the ball.                Offensively Quartberack Ryker Fyfe finished the ball game 23/37, with 220 Yards, and a Touchdown, Terrell Newby ran for 98 yards, and three touchdowns, and Jordan Westerkamp hauled in 85 yards and a touchdown. For the Blackshirts Senior Captain Josh Banderas made nine tackles, and Senior Micheal Rose Ivy made six as the seniors said goodbye to the Husker faithful. 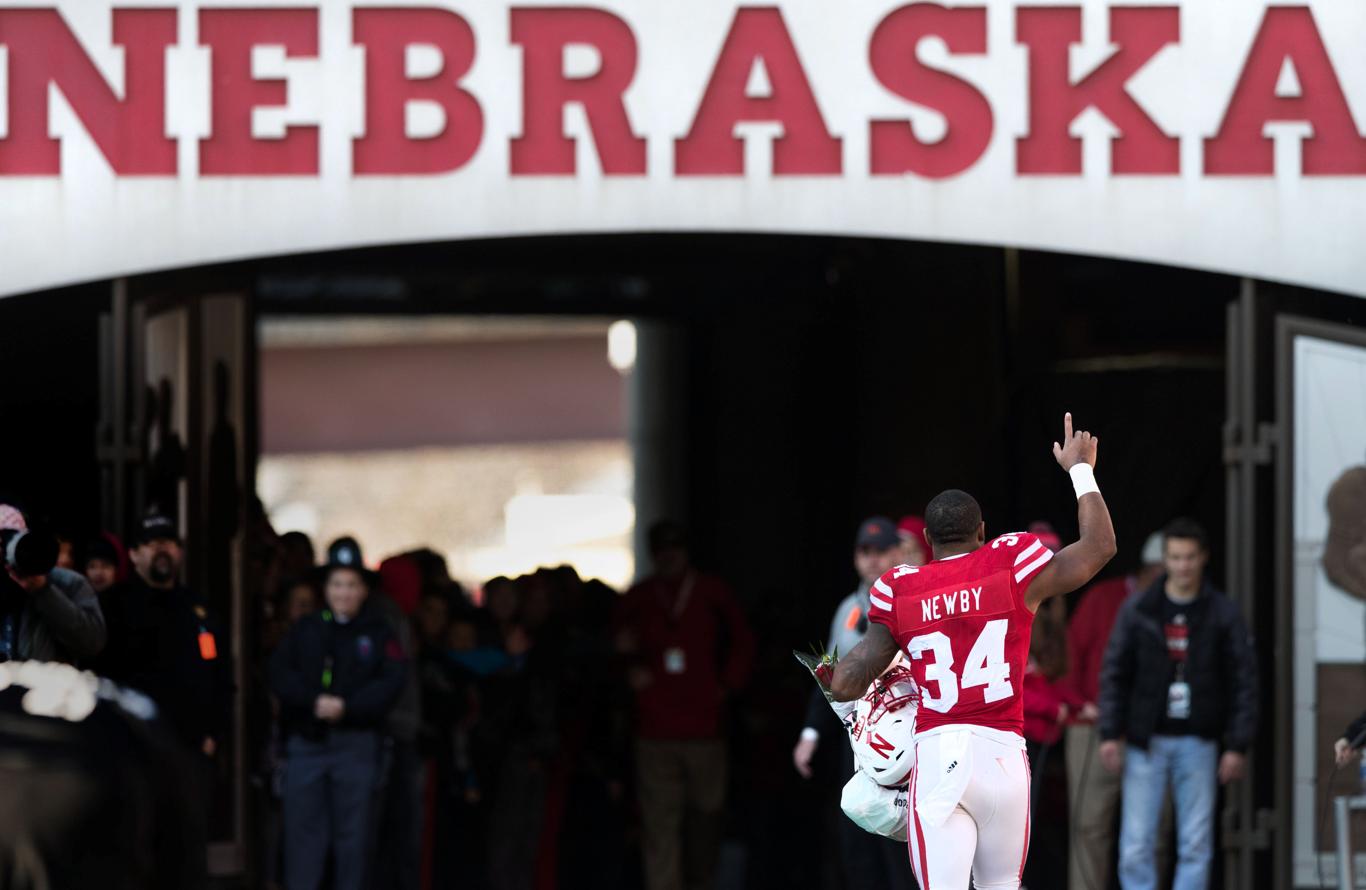 The Huskers (9-2, 6-2) will finish up the regular season next week in Iowa City with a chance to win the B1G West with a win and a Wisconsin loss to Minnesota. As for Maryland the Terps (5-6, 2-6) will look to clinch a bowl game bid with a win over a really bad Rutgers team at home next week. 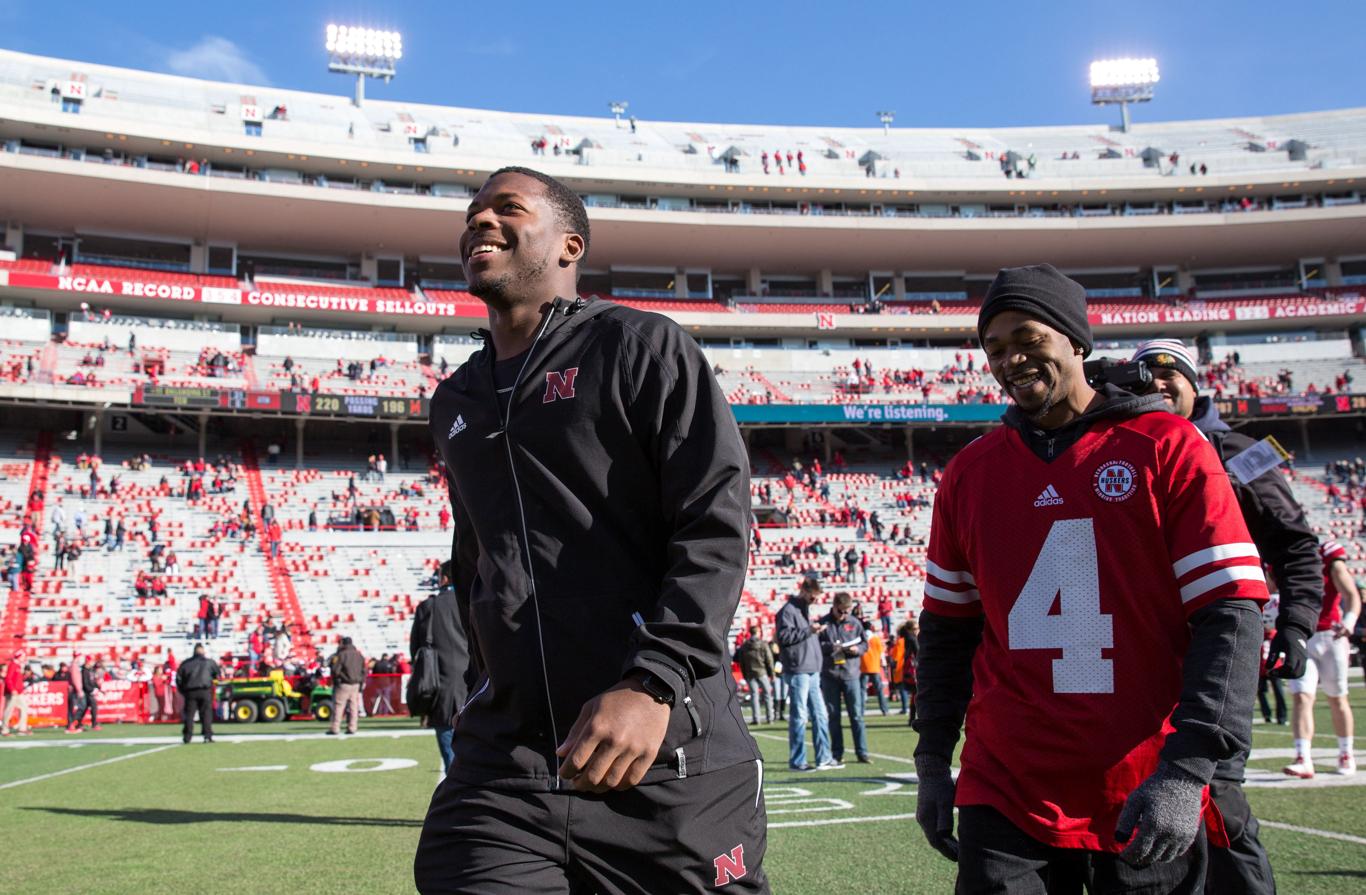 The Huskers will hope to get Tommy Armstrong back for their battle with Iowa next week. (MATT DIXON/THE WORLD-HERALD)