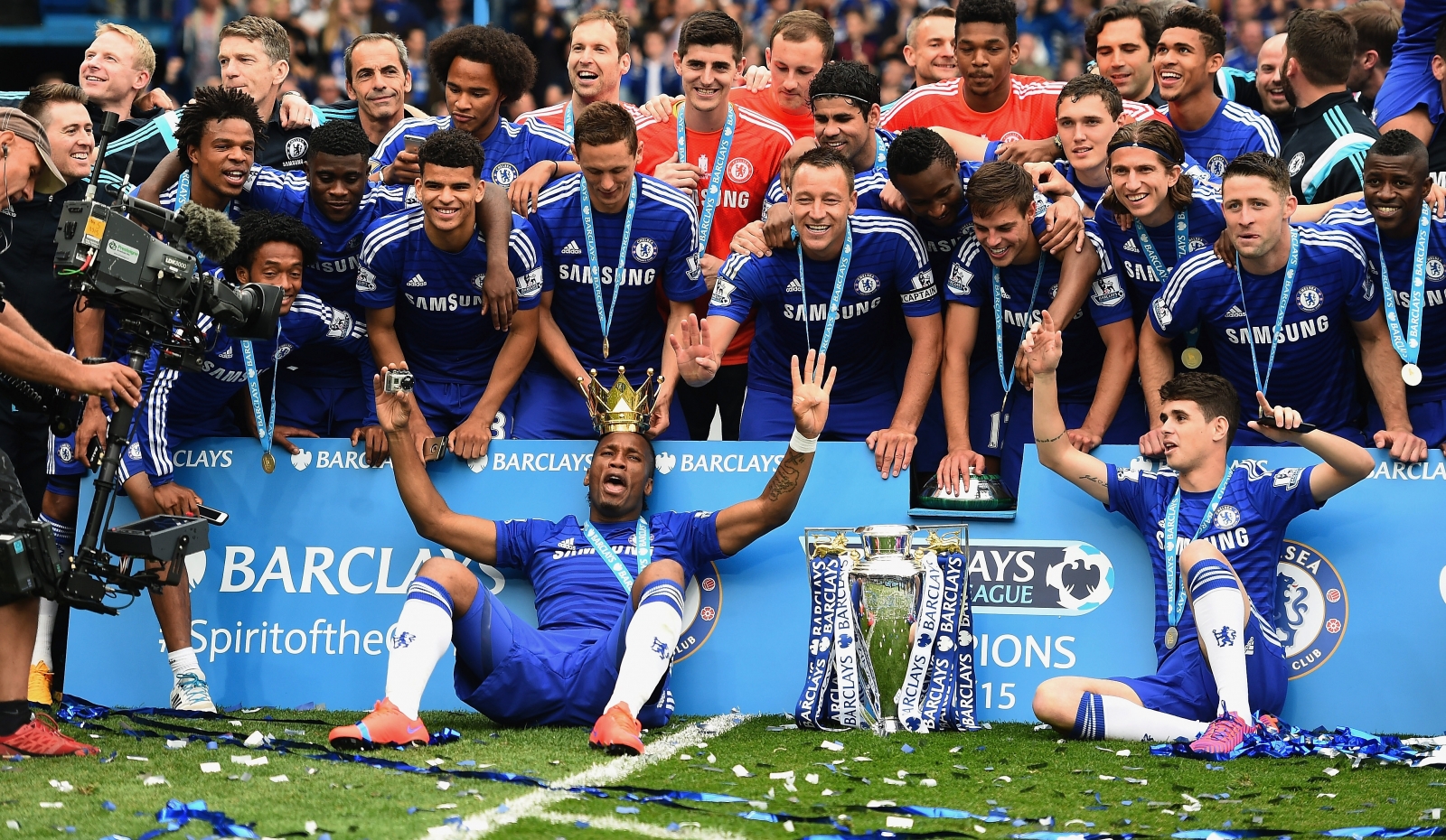 Chelsea FC, who just last year showed every team in the Barclay’s Premier League how to win the title, has started their 2015-2016 campaign off on the wrong foot. With only 4 wins out of 14 played, Chelsea sits uncomfortably in 14th. They are only 5 points above the “relegation zone”, or the bottom three teams. Fans are beginning to become restless waiting to see some glimpse of hope that Chelsea can turn their season around.

Last year, Jose Mourinho showed he was in it to win it from the beginning of the summer transfer window. Key signings include the likes of Cesc Fabregas, who recorded 3 goals and a whopping 18 assists, Diego Costa, who finished third in the race for premier league goal scorer with 20 goals, and Kurt Zouma, a young, physical central defender who stepped up in a big way towards the end of the season. Add that to the return of Chelsea’s king, striker Didier Drogba, and the solidification of Chelsea’s back four, and it seemed almost inevitable that Chelsea would finish in the top third. Last season, veteran defender John Terry captained his side to the title. After a 5-3 loss to Tottenham Hotspur on January 1st, 2015, Jose Mourinho made it his goal to limit his sides goals conceded stat. And his defense did just that, allowing only 13 goals in Chelsea’s last 18 games. Chelsea’s offense also stepped up towards the end of the season, beating Swansea City 5-0, Manchester United 1-0, and Sunderland 3-1. Last year the most valuable players included Eden Hazard, a skillful winger whose ability to change the momentum of a game is like no other; Nemanja Matic, a physical workhorse that every club needs in the center of midfield; John Terry, who showed that positioning and the mental ability to read the game makes up for speed; and obviously the Spanish duo of Cesc Fabregas and Diego Costa.

This season is almost a complete opposite of last year. I was able to go to watch Chelsea’s preseason friendly against the New York Red Bulls in New Jersey, and already didn’t enjoy what I saw from the Blues. Chelsea lost 4-2 against the American side, a surprising underdog story. While the argument can be made that Chelsea didn’t start the same team from the end of last season and it was only a friendly, the way Chelsea’s players played is comparable to the way they have played in recent games. The main issue that stuck out to me was the lack of fitness by our main players. Diego Costa jogged to the passes that he sprinted to last season. Branislav Ivanovic was caught out of possession and was beaten by the Red Bulls’ speedy wingers. A lack of creativeness in the midfield shone as players like Eden Hazard, Oscar, and Willian failed to link up inside the final third. 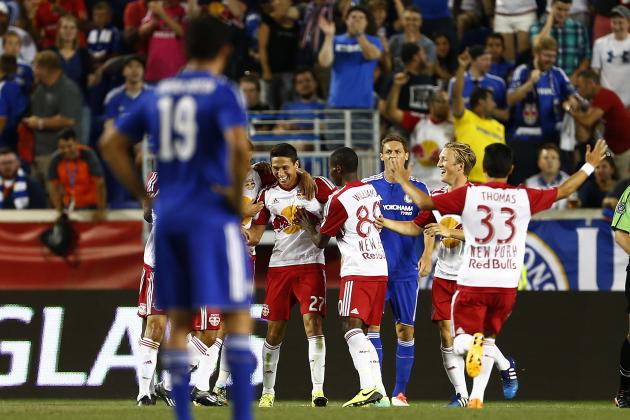 (Photo from bleacherreport.com)-Costa (#19 in blue) watches as the Red Bulls celebrate their win against the premier league champions.

Here are the four main reasons that Chelsea have struggled to win games this year.

2. Cesc Fabregas is not a defensive midfielder.

Last year, Fabregas was able to play a more advanced role in the center of Chelsea’s midfield, leaving Matic alone to play the role of defensive midfield. However this year, Matic is out of form and Chelsea’s defense is struggling to keep clean sheets. Chelsea needs to start playing two defensive minded players and only one central attacking midfielder.

3. Hazard is lost at sea at left midfield.

Eden Hazard, the premier league’s player of the year last season, has been very tame this season. But, it’s is not due to his stats or a lack of fitness. No, it is due to the fact that he is so isolated during games. Hazard has struggled to link up with Diego Costa, Oscar, and Fabregas during games. Last season Hazard completed 2216 passes, and 714 of those were in the final third of the pitch. Hazard was fouled the most times last season and created 67 chances, the most in the premier league. Players like Oscar and Fabregas have not been playing well this season, while our wingers, Hazard, Pedro, and Willian, have been. Mourinho should consider moving Hazard into the center of the pitch and playing Pedro at left midfield.

4. Lack of signings over the summer.

Last season Jose Mourinho proved that Roman Abramovich and him have a happy relationship. Over the summer Mourinho brought in players like Fabregas, Costa, Filipe Luis, Kurt Zouma, Loic Remy, and Didier Drogba who provided depth for a depleted team. However over this summer, Chelsea lost Petr Cech and Mohamed Salah and failed to sign big players. Chelsea signed Radamel Falcao on a season loan and brought back some of their loaned players such as Bertrand Traore, but they couldn’t sign players that would make an immediate impact, with the exception of Pedro from Barcelona. Chelsea needs to solve some of their problems by signing players over the January transfer window.

What does Chelsea need to do over the January transfer window?

Chelsea have confirmed that Brazilian right back Wallace will return to Stamford Bridge. The 21-year-old has failed to make an impact with the Italian club, Carpi, and will come back hoping to add depth in Chelsea’s defense. Chelsea have also been rumoured with Benfica’s star right back, Nelson Semedo. Mourinho will attempt to sign the 6-foot, 22-year-old, but he will have to fight off other clubs such as London rivals, Arsenal.
2. Sign a striker (Sell Costa?)

Almost every Chelsea fan has at some point this year said they wish Costa would be sold. The Spaniard has just 3 goals in 11 games and 3 yellow cards. He is out of shape and continues to play the role of an “thug”, causing numerous altercations between him and other players during games. Loic Remy hasn’t been given a lot of playing time, however he can provide the speed and strength of Costa without the lack of discipline. Chelsea have been rumored with Atletico Madrid’s Antoine Griezmann. The French striker has shown his ability to score goals in La Liga (6 in 13 games). Griezmann is estimated around 45 million Euros. Another possible player is Odion Ighalo. The Nigerian striker has 8 goals in 14 games for Watford. At 6 foot 2 inches and 154 lbs, Ighalo is a dominant presence on the field who could be a back up for Diego Costa, should Chelsea decide to keep the Brazilian.

(Photo from e24sn.com)-Ighalo scores against Newcastle.

The Brazilian, who shined last season as Chelsea’s replacement for Frank Lampard, has failed to impress fans and Mourinho. Oscar has started only 4 of Chelsea’s 14 premier league games and has only managed to find the back of the net once this season. Clubs such as Italian powerhouse, Juventus, have shown interest in the 24-year-old. If Chelsea can get a fair transfer fee from a club, it will help clear up the center midfield position and possibly allow players such as Willian and Eden Hazard to play a more centralized role.

Alex Teixeira: A Brazilian attacking midfielder, who currently plays for Ukrainian side Shakhtar Donetsk. The 25-year old can play striker or central midfield and could provide Chelsea with a quick and skillful option if they decide to sell Oscar. Teixeira has also proved his capability to shine in important games; he has three goals in five games in the Champions League.

Emmanuel Adebayor: The Tottenham striker has barely played in over two years, but when given the chance, shows his ability as a powerful, aerial threat. Chelsea should look to loan the Togolese and test him out.

Bacary Sagna: The French right back has proven that even at the age of 32, he can defend against the speedy wingers of the premier league. Sagna has played all 90 minutes in 13 of Manchester City’s 14 games. He has committed only 6 fouls and received just one yellow card. (Photo from tribune.com.pk)-Sagna (left in dark blue) has faced the top players in the world this year, such as Cristiano Ronaldo (right), and managed to play well against them.