Chelsea proved that they are playing well under Hiddink’s management. Manuel Pellegrini decided to play six youth players in the starting lineup and start Willy Caballero over Joe Hart. This decision backfired on Man City as Chelsea went on to score 5 goals. Man City’s defense couldn’t deal with Chelsea’s attacking force and the young attacking players for the Citizens struggled to break down Chelsea’s defense. The first goal came from a brilliant header by Diego Costa. Eden Hazard crossed the ball over Man City’s defense and Costa powered a diving-header into the top left corner. Two minutes later, Man City’s young team surprised everybody scoring a good team goal in the 37th minute.

After half time, Chelsea came out guns ablazing. Willian scored a brilliant finish after Hazard played in a perfectly timed pass to the Brazilian. Willian took a touch and passed the ball into the bottom left corner. The third goal game again off a Hazard cross. The Belgian drilled the ball across Man City’s 6 yard box. It took a deflection off Adarabioyo and fell to Gary Cahill. The English center back fired a half-volley rocket into the back of the net. 14 minutes later Hazard scored a goal of his own, curling a free-kick around the wall into the bottom right corner.

Chelsea absolutely dominated the game, controlling 62% of the possession and had 8 shots on target. Guus Hiddink proved that he knows how to win games in the FA cup. Today was a good day for Chelsea fans and gives hope to the fans looking forward.

Courtois: 6.5 – The Belgian international didn’t have much to deal with today. Manchester City opted to sit most of their regular team, deciding to play their young players instead. Besides a ball across his net that was poorly dealt by Azpilicueta, Courtois didn’t have to make a lot of saves.

Baba: 7.0 – The Ghanaian left back played another good game after being forced into the starting lineup with John Terry out injured. He shows great attacking vision, crossing the ball into the ball and taking on defenders. Baba also showed that he can do a solid job at defense. While he didn’t have much to deal with during the game, Baba shielded out Man City’s wingers.

Ivanovic: 7.0 – He played a good game at center back. Ivanovic started out at Chelsea as a center back and with Terry’s injury, the Serbian defender moved back to the middle of the pitch. He didn’t have too many problems and didn’t have to make a lot of crucial tackles.

Cahill: 7.5 – Cahill took some beatings today, but it all payed off with a fantastic finish in the 53rd minute. Cahill didn’t have to defend experienced players, but he did have to deal with Manchester City’s youth players and their quickness. He controlled the defense and made Thibaut Courtois’ day very easy.

Azpilicueta: 7.0 – He struggled to deal with a ball played across the penalty area by Iheanacho and his defensive error cost Chelsea a sloppy goal.

Fabregas: 8.0 – Fabregas was able to play a for attacking role today due to Man City’s back line playing a bit deeper. He linked play together with brilliant one-twos.

Mikel: 7.0 – Bossed the center of the pitch and bullied Manchester City’s young, inexperienced players. He didn’t have too productive of a game, but he broke up play and started counter attacks.

Hazard: 9.0 – Finally, Chelsea fans can say it. Hazard looked like the player he was last year. The Belgian was involved in every single goal. He assisted Costa on the first goal of the game. Hazard got into a lot of space and created a lot of chances for his teammates. Hazard also got an assist to Willian on a great counter attack with a beautifully timed pass from the Belgian. Then in the 53rd minute, Hazard drilled a cross into Man City’s penalty area. Hazard’s cross fell to Cahill after a deflection and Cahill pounded it into the back of the net, debatably a third assist for Hazard. Hazard also banged in a fantastic free kick, making Caballero go the wrong way before drilling the ball into the bottom right corner.

Willian: 8.0 – The Brazilian winger showed yet again that he deserves to be playing all 90 minutes of every game. He struggled to get corner’s in but he was brilliant in leading the counterattack.

Pedro: 8.0 – Again, Pedro played brilliantly. He attacked Manchester City’s defense. He had a shot deflect of the post and another shot saved by Caballero from point-blank range. Pedro sprinted back on defense and then sprinted up the field time after time again. His work rate fueled Chelsea in the second half.

Costa: 8.0 – Costa scored a brilliant team goal, finishing a Hazard cross with his head in the 35th minute. Costa has played incredibly well since Mourinho’s sacking. He pressured Manchester City’s defense with his strength.

Traore: 6.5 – Drew a penalty kick in the 74th minute, but Oscar’s penalty was saved. Then in the 89th minute, he flicked on a cross from Oscar which landed off the post and into the back of the net. He played well and showed Hiddink his natural talent as a striker.

Oscar: 7.0 – His penalty was saved by Caballero, but he assisted Traore’s goal in the 89th minute. Oscar has had great games this year, but also some games where he struggles. Today he didn’t struggle. 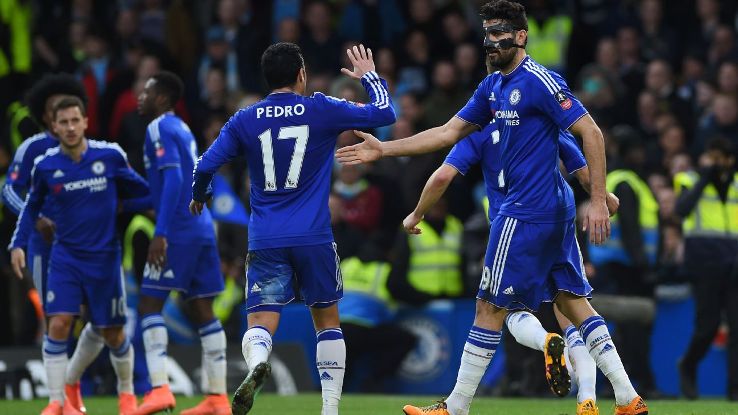