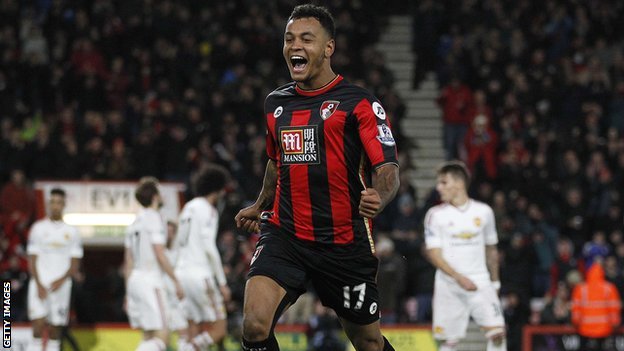 Louis Van Gaal’s Manchester United fall on the road against the former Division II side, AFC Bournemouth in a 2-1 defeat. [Getty Images/BBC Football]

Game Summary:
In the 2nd minute of the game, left winger, Junior Stanislas scored a magnificent goal directly from a corner kick–the ball blew just past the outstretched arms of United keeper David De Gea into the top right corner of United’s goal. The goal put United on it’s heels for the rest of the game. In a match that was recognized as a “must win” by many United critics, the red devil players let the game slip through their fingers. Having 57% possession for the entirety of the 90 minute game, United’s number of shots and shots on target matched Bournemouth’s at 11 and 5, respectively. It was evident that Bournemouth was more passionate than United, both in play and in spirit. In the 24th minute of the game, Marouane Fellaini fought to slot home a loose ball inside of Bournemouth’s six-yard box, making the score 1-1. After continually giving away possession and loosely defending attackers, United recieved high pressure from AFC Bournemouth. Subsequently, after suffering a corner kick, the former Manchester United player, Joshua King carefully slotted a well worked set piece into the back of United’s net to make the score 2-1. United failed to answer back, only showing signs of urgency in the final 2 minutes of stoppage time.

Injury Updates:
Van Gaal’s side is having serious issues concerning organization and off-the-ball movement. Due to injuries and suspensions, United is currently missing 8 critical players.

Matteo Darmian suffered a hamstring injury during United’s 3-2 defeat to Wolfsburg in the Champions week early this week.

Chris Smalling suffered a groin injury during the match against Wolfsburg as well, but valiantly played through it until the final whistle.

Antonio Valencia is also still recovering from a recent surgery on his foot.

Ander Herrera suffered a hamstring injury in late November, but is set to return in the coming weeks.

Luke Shaw is recovering from a double fracture that he received in the loss against PSV Eindhoven and will miss the remainder of the season.

Due to injuries, Van Gaal has been forced to shift the lineups in undesirable ways. Because of this, the defensive back four have suffered tremendously. Cameron Borthwick-Jackson debuted at left-back today, showing signs of promise in the first half with a few dangerous crosses, but fizzled out during the second. At right-back, the young Uruguayan, Guillermo Varela started again for the injury Darmian and failed to make much of an impact. He found himself mistiming overlapping runs and unable to read the movements of other players. Sitting in the center-back positions were Daley Blind and Patty McNair. Daley Blind has started most games filling in for Phil Jones, but was not able to sync up with McNair throughout the match. Patty was found again and again making too many forward runs without generating much of a force attacking. In the 70th minute during the AFC Bournemouth game, Daley Blind was caught covering for the misstepping Patty McNair that led to a near goal from Glen Murray. Unfortunately, United do not have very many other options in the back and it is up to young and upcoming players to fill the demanding roles of their injured teammates.

Van Gaal was already facing heat from United supporters prior to the loss against Bournemouth. During the previous match against West Ham, the crowd chanted “David Moses” again and again showing their disbelief in Van Gaal’s infamous “philosophy.”

A painful defeat and a disappointing situation, there’s no excuse. We are @manutd and we’ll fight back

What can Van Gaal do to turn the crashing ship around?

It is evident that Manchester United have lacked force going forward. Memphis Depay has declined in performance since his debut, scoring only 2 goals in the Barclays Premier league thus far. Juan Mata has been unable to to link up with the number 9 striker for many weeks. Which is why Van Gaal has been so weary about playing him at center-attacking midfield. Wayne Rooney has been off his game since the beginning of the season–only scoring 9 goals in all competitions. Anthony Martial is the only player showing desire going forward and creating opportunities.

To change this, Manchester United need to sign a stud center back during the January transfer window. Surprised? You should be. Because Manchester United is so weak in the back, Van Gaal is forced to play with two players in front of the defense. By signing a strong center-back, there will no longer be a need to play with two holding midfielders. There have been many instances in which Schweinsteiger and Schneiderlin have moved into the same space to receive the ball moving out from the back. By pushing Schweinsteiger up into a more advanced role, United will have more numbers forward to bypass the opposition. Schneiderlin will then have more time and freedom to pick out more through balls for the forwards and wingers. Unfortunately, this would only be possible if United worked on their off the ball movement. As noted in the AFC Bournemouth game, there were too many United players waiting along the back line for balls over the top–making it very easy for the opposition to defend. Instead, there should be a more diverse mixture of players checking in and away from the ball.

But until then, United will be playing boring football for the remainder of the season.