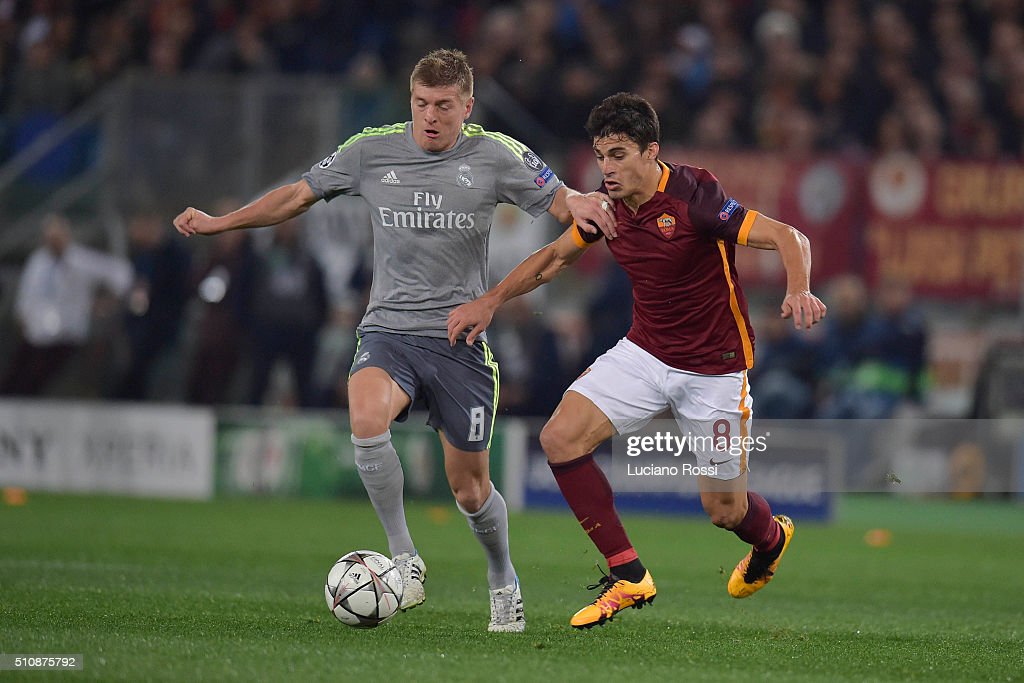 Toni Kroos (left) fends off a challenge from Diego Perotti as Madrid went on to win the game comfortably 2-0. [Getty Images]

In the first leg of the Roma vs. Real Madrid matchup, Roma struggled at home.  They were outplayed by Madrid; the Spanish club held the advantage in possession (61% to 39%) as well as shots (19 to 11).  The first half was rather uneventful, with the only decent chance coming off a half volley from Marcelo that was a whisker wide of the post.

The offensive play picked up 10 minutes into the second half, however, especially on the counter attacks.  In the 55th minute, the newly transferred in Stephan El Shaarawy dribbled his way through on goal, but Keylor Navas made a brilliant save and clearance with the body.  Minutes later, Ronaldo chopped his way past Florenzi to deftly curl the ball into the net from the edge of the box, making the scoreline 1-0 to the Spanish club.  This was Ronaldo’s 12th Champions league goal this season.  Roma got their best chance of the game in the 72nd minute, when Dzeko found Vainqueur at the edge of the box, but the midfielder sent the ball wide of the post.

To finish the match off, the substitute Jese Rodriguez slotted the ball into the bottom corner from his right foot in the 86th minute.  This was the nail in the coffin for Roma, who could not gain any consolation goals in the little time remaining after Rodriguez goal.  In a competition where away goals is the first tie-breaker after goal differential, this is a bad start for Roma.  Roma would need to win the second leg at the Bernabeu by a margin of 2 goals at least to make it to the second round of the Champions League.

Best and worst of Roma:

Few fullbacks can contain the threat that Cristiano Ronaldo poses, and he fared pretty well in the first half.  However, he was cut open for Real’s first goal and almost let Ronaldo in for a few more later on.

Pjanic had a quiet night, with poor set pieces, which is unlike his typical performances.  He was muted and underperformed.

Salah was consistent in his troubling of Real’s defense.  Salah tied Marcelo in knots.  His dribbles and incisiveness were great, but could not find the finishing touch for his shots.